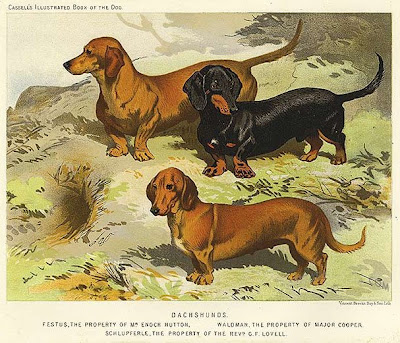 (click image to enlarge)
The Royal Society for the Prevention of Cruelty to Animals, one of England's major animal welfare charities, has announced it is pulling out of running stalls at Crufts, "the Greatest Dog Show on Earth," because of fears that thousands of pedigree dogs are suffering due to genetic defects and inbreeding. Specifically related to the dachshund: Old prints show a small powerful dog with strong hind legs, but today the breed has a bizarrely elongated body and tiny legs. Serious back problems are common and inbreeding has made epilepsy and deafness common. Running and jumping are difficult for today's dachshund.
Excerpt from the Scotsman: Yesterday, the Kennel Club, which runs Crufts – to be staged next March – said the RSPCA's comments were "unhelpful". But its own figures reveal one in ten pedigree dogs suffers problems that affect quality of life.
Caroline Kisko, Kennel Club spokeswoman, said: "The Kennel Club is dedicated to improving the health and welfare of dogs through responsible breeding. "The fact that the RSPCA continues to make such unhelpful statements … is extremely regrettable but we will continue to endeavour to work with them despite their stated position, for the benefit of dogs."
Read all about it the Scotsman.

Related: The Quest for the Perfect Dog
Posted by Rowdy and Bette at 9:08 AM