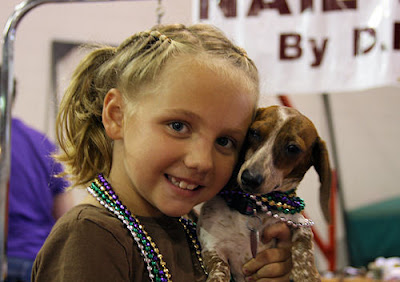 A young assistant helps out at the DRNA nail clipping booth. The smooth red piebald is one of the 1,000 dogs (mostly dachshunds) recently rescued from the Parkersburg, WV, puppy mill.
Well, we sure had fun at the 12th Annual Midwest Dachshund Festival sponsored by Dachshund Rescue of North America on Saturday in Danville, Illinois. We went for a long car ride on Friday, and Dad tricked us because we thought surely we must be going to visit Grandma and Grandpa, but we ended up in some hotel room. It all made sense the next morning when saw all the dachshunds and recognized some of the good folks in attendance. It looked like it was going to rain all day, so the festival was moved indoors at the last minute, and of course it didn't rain a drop.
There was plenty to do.....there were several parades honoring different dachshunds and their humans....doxies with back injuries, alumni of the festival, new attendees, and a costume parade. There were several contests including farthest traveled, most doxies brought to the festival, a costume contest, littlest dachshund, biggest dachshund, and of course wiener races! We're not quite sure, but we think that the smooth red piebald pictured above won the littlest dachshund contest, weighing in at just four pounds!
There were also several vendors there....dog related vendors, a professional photographer, doxie vendors, and the rescue organizations including MWDR, and IVDD resource Dodgerslist had booths with lots of fun raffles. We've lost a couple pounds over the last few years, or maybe our long and short bodies have just reorganized themselves, but the good folks at Hug-A-Dog Harness took our harnesses for a free adjustment! Wow! We also bought a case of III Dachshunds Root Beer to share with our friends, and even a sleigh pulled by a smooth and longhair (like us) to put in our front yard for the holidays.
All in all, it was great fun, and thanks to DRNA and all the dedicated folks and their wonderful doxies who put on such a nice event.
Check out news coverage of the event at the Commercial-News. There are some heartwarming stories to read.

Related: 2007 Recap: Dachshunds Get Wet in the News 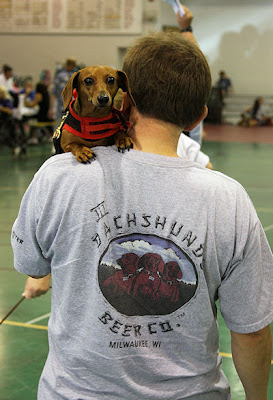