Dachshund News Stories That Won't Go Away: The Dachshund's Decline in Germany 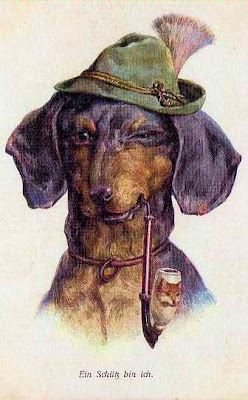 We simply refuse to believe it. We first reported this story back in August of 2007: Panic in Germany: Is the Trusty Dachshund Dying Out? and thought like a bad penny, this story keeps turning up, as it was all over the papers just a few months before. Well, it's back again,, as it's been reported at about a dozen news sites over the last week. It seems to show up in the press about every 6 months or so. Interesting and fun, nevertheless!
We tend to believe that, much like the fact that this story will never die out, neither will the dachshund in the Motherland. We're just taking a break before the Dachshund Revolution.

Related: Panic in Germany: Is the Trusty Dachshund Dying Out?
Posted by Rowdy and Bette at 7:29 AM