In a sad tale out of Bonners Ferry, Idaho, a routine vaccination may be to blame for the death of 'Tina,' a smooth chocolate dapple. Our hearts go out to Tina's human and dachshund family. Excerpt from KXLY: Last month, Mokka, Olga and Tina all received the Vanguard+5 vaccination, to prevent diseases such as distemper and leptospirosis, a potentially fatal disease affecting a dog's kidneys and liver. On the way home, all three dogs began vomiting.
"It was obvious they were in distress," says owner Jerry Higgs. "They couldn't be still, their faces were in distress."
Mokka and Olga eventually recovered, but Tina became paralyzed.
"Her paralysis advanced," says Higgs. "It went from her motor nerves into sensory nerves."
A week later, Higgs says Tina's condition got much worse.
"Wednesday morning, at 10:15, I had to put her to sleep," he says. Read more at KXLY. 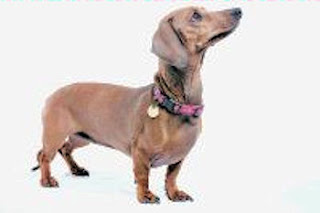 Meet the lean, mean, fighting machine who goes by the name of 'Stitch' out of Gauteng, South Africa. Stitch won the local paper's Pet Slimmer of the Year Award last year by dropping from a whopping 35 pounds to a svelte 16.7 pounds. Way to go Stitch! You're such a beautiful girl! Read more about the dangers of obesity in pets, and see Stitch's "before" picture at The Times. According to the article, studies show that obese dogs live 2 years less than their slim counterparts. 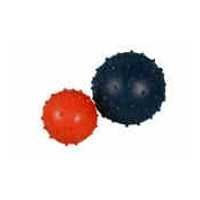 Finally, thanks to Dog Art Today for the tip about this story. If this dog toy looks familiar, it's been recalled after serious and fatal injuries have occurred, so get it out of your house. It's 'pimple ball with bell,' manufactured by Four Paws Inc. It seems that the ball has just one hole, and during play a vacuum can be created and your dog's tongue can get stuck inside. A 10-year-old lab mix named Chai recently had to have his tongue amputated as a result. Read his unfortunate tale at The Chai Story.

Thanks for all that info! It's so sad to hear about the dog and human families who've had to deal with these experiences. We appreciate that you're trying to get the word out! We're smarter now, and so is our staff.