Our Dedicated Folks in Rescue, Continued 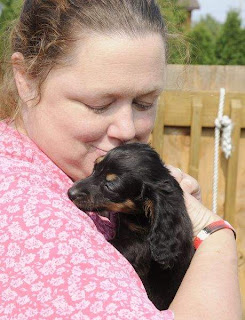 Meet Cindi Ashbeck of Manitowoc, Wisconsin, and one of the doxies, 'Firefly,' from the puppy mill in Parkersburg, WV, where 1,000 dogs, mostly dachshunds, were rescued. As a new volunteer for Dachshund Rescue of North America, Ashbeck has taken in rescued Dachshunds on three occasions since June. Excerpt from htrnews.com: Ashbeck went online and read about a few Dachshund rescue organizations, deciding on the Dachshund Rescue of North America because it was the oldest, had placed the most dogs and seemed to be the best organized.
She applied in May to be a foster parent for Dachshunds and was approved in June. Not long after her approval — she estimated it was maybe a week and a half — she received her first foster dog, 14-year-old Elric. His owners, who'd had him since he was a puppy, had given him up, she said.
"He was underweight. He had calluses under his hindquarters. You could tell he'd been just left out on the cement. His teeth were in horrible condition," Ashbeck said.
Ashbeck has two Dachshunds of her own, and they and Elric didn't exactly hit it off.
"My dogs wanted to eat him and he wanted to eat them, and I'm like, 'What did I get into?'" Ashbeck said. "That first day was pretty traumatic."
Read all about Cindi's trials and rewards of being a foster mom at htrnews.com. It's a great article.

Related: Our Dedicated Folks in Rescue
Posted by Rowdy and Bette at 8:13 AM