Dachshunds Can Sure Chew a Hole in our Wallets 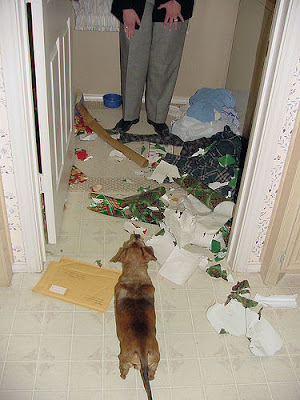 Who, Me? We have a bad habit of ending up at the top or near the top of various lists, so why would the list of destructive dogs be any exception? A total of 3,000 dog owners were recently interviewed by esure pet insurance who found that nearly two thirds had to pay for doggy damage. Most of this destruction came when their pets were just puppies, but nearly 15% said that they had to endure this throughout their dogs' lives. How do dachshunds fare? While we're not at the very top of the list, we're definitely contenders: we cause an average of $777.58 of damage during our lives. The Great Dane was #1 in the survey causing $1,163 of damage, followed closely by the chihuahua, who causes $1,111 worth of damage. Read more at Ananova.

Above, this dachshund made a mess in the laundry room with some wrapping paper one Christmas. Check out more photos by Cameron Tally over at flickr.

Thanks again to our pal 'Clancy' for the tip about this story!

Slightly Related: Dachshunds and Veterinary Care: Oooh, Our Aching Wallets!
Posted by Rowdy and Bette at 8:50 AM