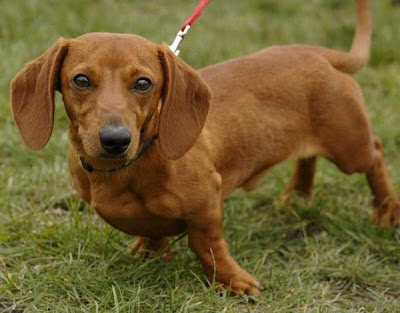 Proving once again that dachshunds rule our lives, here's a dachshund news roundup on a crisp, slightly cool, yet thankfully dry Monday, September 15th, 2008. Above, red smooth 'Herky' attended German Fest in Sioux Falls, South Dakota, on Saturday afternoon. There were wiener races among the many activities at the event. Read all about it at the Argus Leader.

Meanwhile, over in Port Elizabeth, South Africa, there's a dachshund named Heidi with a secret underwear fetish. In 3.5 years, she has pilfered more than 30 pieces of underwear and buried them in the backyard, even after getting her own underwear for Christmas! “She‘s an amazing dog, but she‘s naughty and can't be left alone,” says her human. Read all about Heidi in a fun story at the Weekend Post. 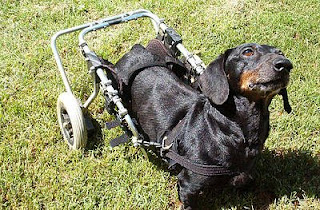 Meet smooth black and tan 'Zipper,' who hails from Lake Mathews, California. After having spinal surgery, Zipper could no longer hold himself up on his hind legs. But now Zipper chases the other dogs and can even play fetch thanks to his wheels.
"It's really improved his quality of life," his human Mark Tyler said. "It's like having a regular dog again." Read all about how carts are helping dogs today, and see a video of Zipper at Riverside County. 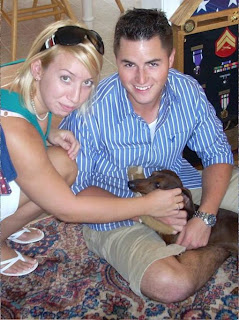 Meet red smooth 'Itchy' and his human, Iraq war veteran Scott MacKenzie and his wife Hillary MacKenzie of Canton, Georgia. Marine corporal MacKenzie was injured in a roadside bomb 2 years ago in Iraq, and is now on disability. In a recent news article, he stated he was looking for a wiener dog to keep him company after leaving the Marines, and the offers poured in. Enter Dachshund Rescue of North America and 2-year-old 'Itchy.' "Everyone deserves a second chance - just like me," MacKenzie said. "It is a true relief and blessing to have him." Read all about the match made in heaven in a fantastic and heartwarming story at AJC.com. 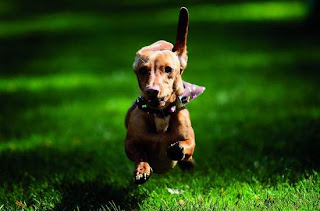 Finally, red smooth 'Roxy' sprints towards her owner, Scott Hudson of Roseburg, Oregon, during the wiener dog races at the third annual Roseburg Family Harvest Festival at Stewart Park Saturday. Read all about the event at the News-Review.

Have a great Monday.

Dachshunds are the BEST!! loved all these stories!
Barbara
a.k.a. Frankie's mom
www.joyfulpaws.com