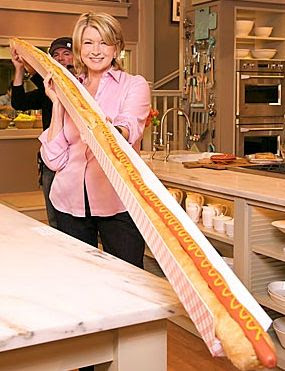 Proving yet again that there's no other dog like a hot dog, here's a dachshund news roundup on a crisp cool fall day, September 29th, 2008. Woof! Above, Queen of Wien Martha Stewart holds up a 15-foot long wiener on a special show last week dedicated to the hot dog. Said Martha:“For those of you who don’t think length matters, I disagree – especially when it comes to wieners."
Thanks to our good pals 'Oscar' and 'Hans' for the tip about the hot dog show....there was a special guest dachshund on the show by the name of 'Rusty,' who was rescued from the Parkersburg, WV, puppy mill. Unfortunately we couldn't find any available video from the show, but you can read more at Martha Stewart. And that's a good thing!

Hey thanks Martha for providing that 'length matters' quote which is a great lead into this next story. Meet smooth black and tan dappled 'Cutie' and his human Susan Cheever, who hail from New York City. Ms. Cheever is novelist, biographer, and recovering sex addict, with a new book out titled “Desire: Where Sex Meets Addiction." Excerpt from the New York Times: “His name is Cutie,” she says. “I didn’t name him. My son named him. I would have named him Goethe or Rilke. Preferably Rilke.” (Goethe, not incidentally, was the guy who wrote “The Sorrows of Young Werther,” a story of obsessive love said to have caused young people all over 18th-century Europe to kill themselves. Rilke was merely hung up on the temporal nature of existence.) Read all about the new book at the New York Times. Thanks to our pal 'Clancy' for the tip about this story!
And by the way....what's up with dachshunds and sex addiction? Just a few weeks ago, there was that David Duchovny story: David Duchovny? We had no idea. We're going to develop a complex. 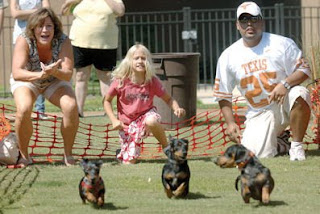 Meanwhile, Marisa Healy, Jordon McHugh Walsh, and Ben Picasio cheer for their black and tans during a dachshund race Saturday at Dog Daze at Fort Walton Landing in Florida. Source. 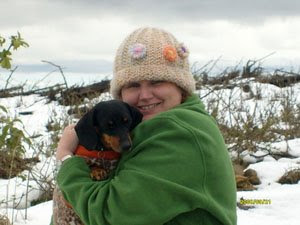 And guess what's right around the corner? You guessed it....Snow! This is the scene last week at the KwaZulu-Natal Midlands in South Africa. Angela Strydom's dachshund's short legs could not reach the ground in the snow. (It')s no fun for a sausage. Source.

Have a great Monday!
Posted by Rowdy and Bette at 8:10 AM