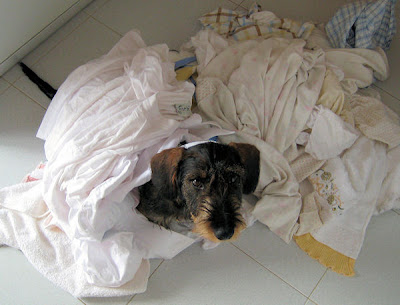 Oscar enjoys a good romp in the laundry (click image to enlarge)
Clara from Portugal writes: This is Oscar. He's 9 months old and a bundle of energy and cuteness. I've always wanted to have a dachshund and when my husband and I decided to get a dog, we were going back and forth with the terriers and the beagles and the dachshunds. Until, of course, we saw Oscar. Now neither of us wants another breed and we're thinking of getting another one. We live in an apartment but we have a huge back yard and built a fenced space for him to run. Oscar sleeps in the house at night and during the day is outside, napping in the sun, racing, growling at the trees; he rarely makes any kind of noise, except from 7pm to 8pm. If we don't feed him there's hell to pay. When we go on walks he's the envy of the neighbourhood. Young or old, everybody finds Oscar the cutest and he works that like a superstar… laying on the floor on his back, licking people's fingers, and making those sad puppy dog eyes…

Maggie says that Oscar is a hottie! She'd love to romp in the laundry with him. Thanks for sharing his story Clara.

What a little cutie :)

How nice to see a portuguese dachshund over here :) One day I need to get one too ;)