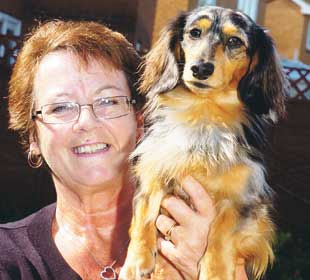 Meet handsome 14-month-old black and tan silver dapple longhair 'Freddie' and his human Heather Taylor, who hail from Worle, UK. Freddie won the local paper's Pets On Parade competition after a public vote from readers. Way to go Freddie! Excerpt from the Weston Mercury: A dog owner has pledged to 'cherish every moment' with her terminally ill companion after it won the Mercury's Pets on Parade competition. The pedigree hound has a terminal heart condition, which could cause him to drop dead at any moment. Heather, aged 58, said: "He's such a great pet and we love him very much. It's awful that he has this illness, but we cherish every moment with him." Read all about it at the Weston Mercury.
Posted by Rowdy and Bette at 8:01 AM