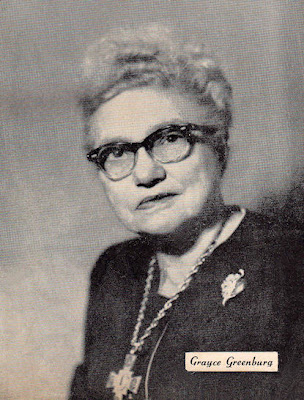 by EDW. F. HIRSCHMAN for The American Dachshund, October, 1959

On Friday, September 4th, our Gracie as she was known to her thousands of friends, passed away after a stroke at the age of 78 years.
She leaves behind her husband Michael, grand children Mrs. Jayne Malherbe, Ali Stark, Jr, and three great grand children.
It was in 1931 after reading an ad in a magazine about the Greenburg Dachshunds, we drove out to Thousand Oaks with our first Dachshund Bergman. We showed him to Grayce and she liked him very much and asked us if we had ever shown him. Needless to say we did not know what she was talking about. She explained to us that she would try to get permission from the Alhambra Kennel Club to pull one of her dogs and substitute Bergman instead, and she did. This was our start in showing dogs and the first meeting with the lady who was to become our closest friend in the dog game for over twenty-eight years. My wife and I were always proud of the fact that she always introduced us to new friends as her children.
She founded the Dachshund Club of California along with her husband Mike and daughter Alverna in 1931 and held every office in the club in the years that followed.
She also founded The American Dachshund magazine in September of 1939 which is today the finest breed magazine in the United States. As its chief editor she did not miss a single monthly issue in 20 years, at times reaching in her pockets to pay the bills and keep it going.
She wrote three books on our breed, printed by the Judy Publishing Co. of Chicago, all of which had many reprints because of their popularity.
She held a license for years to judge our breed - as well as hounds and has judged most of the best shows in the country. In recent years she also judged all toys and many varieties of the non-sporting group. She was made Dogdom's Woman of the Year in 1953 by the Gaines Research Center.
Her Champion Kensal Call Boy whom she imported from England, was the first dachshund in America to win the coveted "Best Dog in Show" award. Judge Frank Simmons made the award at the San Bernardino Show in 1931.
Along about 1936 she was presented with the registered kennel name of Teckelheim by a friend of hers in the east, Mrs. Emil Fuchs, if my memory serves me correctly. I believe it is the oldest registered dachshund kennel name in America.
Grayce, as Show Secretary, and her husband Mike ran the Ventura Kennel Club for about 25 years.
I firmly believe that Grayce Greenburg, through her unselfish work for the breed, should be given the credit more than any single person in America for our breed becoming one of the most popular breeds in America. The A.K.C. registered 373 dachshunds in 1931 and the staggering total of 40,100 in 1959.
Grayce's every thought throughout the years was for the good of dachsies, their owners, the Dachshund Club of California and its magazine, the American Dachshund.
She was the most unselfish person as to the above ideals I have ever known in the twenty-eight years of our acquaintanceship. She was looked up to as the "First Lady" in Dachshunds by all who knew her or of her.
As I sit here and think about all the people that i have seen and met during the last quarter of a century in the dog game, I find myself with many pleasant memories of the real fine people we came in contact with.
Then on the other hand I can't help think of so many people in our breed who cared nothing for the breed, were only interested in satisfying their own ego, winning at shows, making money, took everything out of the breed and gave nothing. Thank goodness, these kind never last too long.
When I think of Grayce Greenburg and what she stood for in our breed I can easily forget most of the rest.
If there is a special Valhalla in heaven for dog people who have given all of themselves in time and love toward our dachshunds, Grayce will be sitting in the Queen's chair.
I know Mike Greenburg must get some consolation from the fact that his wife of 58 years was regarded as the "First Lady" in Dachshunds by all who knew her.
A person like Grayce Greenburg comes along once in a lifetime and I am so glad I was fortunate enough to have known her during mine.
Posted by Rowdy and Bette at 8:25 PM