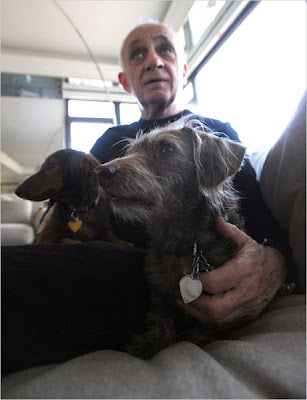 Could you debark your dog?  That's the question thousands of dog lovers are answering all over the country after this article was published in The New York Times on Tuesday.  Meet 'Nestlé,' right, a Dachshund-terrier mix who had his vocal cords cut by a veterinary surgeon after a neighbor in the family’s apartment building on New York's Upper East Side threatened to complain to the co-op board about the noisy dog. His human, Dr. Mike Marder, who is also a veterinarian, says that the new addition to the family, 'Truffle' will also probably be debarked unless she quickly learns to play quietly.  Excerpt from The New York Times:

Although there is no reliable estimate as to how many dogs have had their vocal cords cut, veterinarians and other animal experts say that dogs with no bark can readily be found — but not necessarily heard — in private homes, on the show-dog circuit, and even on the turf of drug dealers, who are said to prefer their attack dogs silent.
The surgery usually leaves the animal with something between a wheeze and a squeak. The procedure, commonly referred to as debarking, has been around for decades, but has fallen out of favor, especially among younger veterinarians and animal-rights advocates.
Dr. Marder said that Nestlé’s surgery stopped the neighbor’s complaints, and “it really did not change the dog’s personality whatsoever,” adding, “He’s certainly a tail-waggy, happy guy.”

Read all about it, see another photo, and listen to Nestlé "bark" at The New York Times.  Thanks to our pals at Flying Dachshunds Films (one of our favorite videographers!) for sending in the link.
Posted by Rowdy and Bette at 9:00 AM

No, I would not. I have 3 dachies who barks at people and dogs passing our yard. I had complaints from neighbours too so I purchased 3 citronella bark collars for outside in yard and on walks. They work and are a humaine way to stop dachies from barking. Other neighbours have started using this anti-bark collar after asking me what did I do to stop my dogs barking. I also lend it to people to try before purchasing one as there are some breeds it does not seem to work on. But for Dachshunds and Schneuzers the citronella bark collar works miracles. I now don't have to turn on as when they see the collars come on them its instant silence as they learn to associate that its no barking when collar is on. Hope this helps others who have barking dogs.

It would be a very difficult choice if it involved potentially getting rid of your dog or moving. I hope I never have to make that choice.

I think there are training and other tools that can be used to limit the barking of your dog. Their are the citronella collars as well as collars that shoot out air that can help train a dog to limit their barking. Also, going to a professional trainer to help with behaviorial modifications helps as well. It is also important to choose a dog that fits your lifestyle. If a barky dog is not going to work for your apartment, don't get a Dachshund or other breed that is known for this attribute. I think people should research and choose accordingly before making such a drastic choice. But I have to agree, if it is this or the dod is given to a shelter, the surgery seems like the better option.

oh my goodness me, no. but i'm not in their situation and don't know all the details, so i don't want to judge. Baxter's barks are so varied in their intention - sometimes they're a cross between anguish and delight (a squirrel, right outside my window and I can't get to it!), sometimes they're a warning that something is awry (dog, get out of my yard!), and sometimes they're happy go lucky (let's play!). But all the times, I like to hear it at full volume.

Wow! I couldn't imagine never hearing my little Samson's bark again. I would feel like I was taking away part of his personality!

That seems pretty extreme for me, but I also live in the country and have no neighbors. It can get annoying at times, they bark and just about everything, but it's what dogs do.

Citronella collars work for most dogs, but we had one lab for a short while that actually ran out of the spray in about 10 minutes. Love the smell.

But, I also don't know what I'd do in a different situation. I'd probably try to do all I could between training and collars before surgery. But in the end, to keep my dog, I might. It's hard to judge another without being in their shoes.

If the only other option was losing my dogs - yes! HOwever, it would be my last resort - certainly not Plan A, B, or C.

How about addressing the problem that led to the excessive barking in the first place? Maybe the dog needs more exercise. Certainly there is a need that is not being met here.
So now the dog won't be heard, but whatever prompted the behavior will still exist. And this dog is owned by a vet! I find this disgusting.

It is in doxies nature to bark but if you train them you can sure cut down on the barking a lot. I just do not think it is right to do this to a dog at all.

never would i debark my three doxies. i can tell which one is barking by the pitch. they warn me when someone is on the porch or in the yard. they say hello to me when i come home from work. lovem with all of my heart.

No. No way would I debark a dog.

I, too, have had very good luck with the bark collar. My doxie was known to to bark incessantly when I was away, so I would only put it on when I left. After a short while, you don't even have to turn it on, they just know. Now, I don't have to put the collar on at all. I am wondering why, or if, this vet didn't try this first...

No. I would move or do anything other than surgery. It is part of her. Ask people who have had there voice silenced because of cancer surgery. Remember the old mikes they would hold to their throats?? I think they could best express what lack of an audible voice means.
They are Dachshunds. They bark.
Anyone see Dogtown last night with the barking Lab. Behavior Mod can work miracles.

No, I wouldn't, I think that surgery is disgusting. And any kind of surgery is potentially dangerous, so unless it's necessary for my dog to live, I wouldn't subject him to it. You can train them to bark less frequently.

Also, dachshunds were bred to have loud barks so that they could be heard underground. Why on earth would you surgically remove something that he/she is supposed to have?? If you don't want a barker, don't get a dachshund. Period.

Horrendous! Kirby barks at everything from the ice maker to the coffee pot. Would you cut the vocal cords of your baby to keep it from crying?