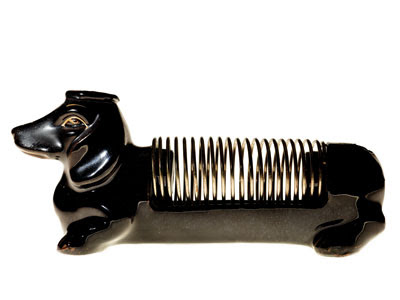 If you watch Mad Men on AMC, the fictional ad agency drama set in the 1960's which has won 9 Emmys and 5 Golden Globe Awards, keep an eye out for this little gem which is one of the props for the show.

This vintage piece for a secretary's desk exemplifies an odd trend: ''The dachshund showed up a lot, for some reason,'' says set decorator Amy Wells on her research of the era. ''It was like dachshunds and poodles were the two iconic '50s/early-'60s dogs.''   Source:  Entertainment Weekly.

Thanks to our good pal 'Clancy' for sending in the link!
Posted by Rowdy and Bette at 8:38 AM

Our Staffer Mom just bought one of those on eBay for her desk! She says it reminds her of us all day at work, except this one holds stuff for her and we won't do that.

ooh - i got dat upstairs! hey anybody else notice the yellow doxie painting behind the sofa in the oreo cakester ad with the dad and his son? it's been on tv lately