Westminster 2010: One, Two, Three, and the Dachshunds are OUT 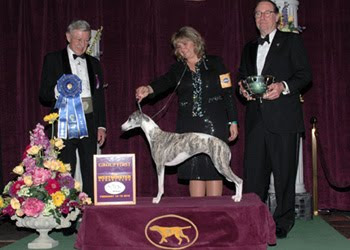 Congratulations to the Whippet, 2-year-old Ch Starline's 'Chanel,' for taking the Hound Group at the 2010 Westminster Kennel Club Dog Show.  It looked as though wirehair Dachshund Ch Gleneagle's Who's Famous Now had a great chance at taking the spot after making the initial cut and being THE crowd favorite, but ultimately the crown went to the Whippet, followed by the Greyhound, Scottish Deerhound bitch Ch. Foxcliffe Hickory Wind, and the seven-year-old Australian-imported PBGV dog Ch. Rokeena Carte Blanche.

Just wait 'til next year!

Breed judging highlight videos are available throughout the day on the Westminster Web site.
Posted by Rowdy and Bette at 8:11 AM