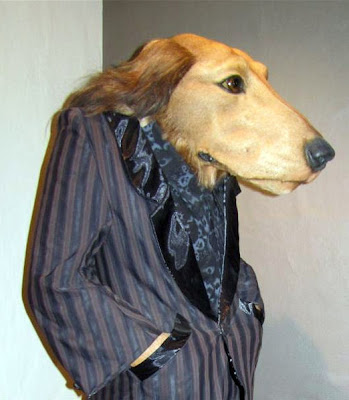 This mannequin is a sneak peak at what the Dachshund characters might look like in the upcoming 'Lonely Dog' film.  Artist and creator Ivan Clarke will be executive producer for the film, which could still be years away.  He states:

"Pre-production has started, but it is still at the concept stage.
"They are talking about live action with actors, but with digital replacement of the heads of the characters - a bit like in the film The Curious Case of Benjamin Button.
"But I am still not sure exactly how they will end up creating the movie version of this adults' fairy tale," he said.

Related:  Warner Bros. Acquires Screen Rights to 'The Lonely Dog' - Get Ready for an Epic Dachshund Movie
Posted by Rowdy and Bette at 8:52 AM

oh my, can't wait to see how this progresses. the head is kinda doxie, but it would help if they shortened the arms and legs and extended the torso.

If that photo is supposed to be a doxie, yuk, he sure is too ugly to be our cute little doxies. Hope they change that face.