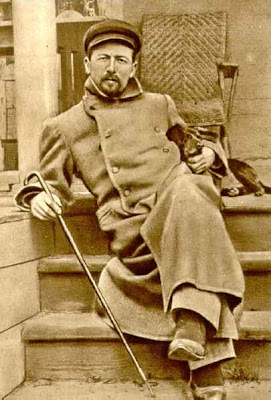 Who?  Anton Pavlovich Chekhov, 29 January 1860 – 15 July 1904, was a Russian short-story writer, playwright and physician, considered to be one of the greatest short-story writers in the history of world literature.  His career as a dramatist produced four classics, and his best short stories are held in high esteem by writers and critics.  Chekhov practised as a doctor throughout most of his literary career: "Medicine is my lawful wife", he once said, "and literature is my mistress."
Oh yeah, he was a Dachshund Lover.  In 1892, Chekhov bought the small country estate of Melikhovo, about forty miles south of Moscow, where he lived until 1899 with his family.  In April of 1893, his sister brought home two Dachshunds; the "blackish dog" was named 'Bromine,' and the "tan bitch" was named 'Quinine.'  Quinine is a drug used in his day to treat advanced cases of tuberculosis, the disease that had killed his brother Nikolai in 1889 and would take his life in 1904.  Bromide was a sedative, as well as a cliché.  Chekhov is pictured above with Quinine at his side.
On the day the Dachshunds came to live with him he wrote:

The Dachshunds have been running through all the rooms, being affectionate, barking at the servants.  They were fed and then they began to feel utterly at home.  At night they dug the earth and newly-sown seed from the window boxes and distributed the galoshes from the lobby round all the rooms and in the morning, when I took them for a walk round the garden they horrified the farm dogs who have never seen such monstrositites.  The bitch is nicer than the dog...But both have kind, grateful eyes.

In August of 1893 after the Dachshunds spent the day chasing hens and geese in the garden, he wrote:

Brom is nimble and supple, polite and sensitive, Quinine is awkward, fat, idle, and cunning.  Brom likes birds, Quinine digs her nose into the ground.  They both love to cry from excess of emotion.  They know why they are punished.  Brom often vomits.  He is in love with a farm bitch.  Quinine, however, is still an innocent maiden.  They love going for walks across the fields and in the woods, but only with us.  I have to smack them almost every day:  they grab patients by the trousers, they quarrel when they eat, and so on.  They sleep in my room.

And on his affection for the dogs, his sister noted:

Every evening Quinine would come up to Anton, put her front paws on his knees and look into his eyes pathetically and devotedly.  He would change his expression and say in a broken old man's voice:  'Quinine!  You poor old thing!  You ought to go to hospital, you'd feel better there.'  He spent a whole thirty minutes talking to the dog and made everyone in the house helpless with laughter.  Then came Brom's turn.  He too would put his front paws on Anton's knee and the fun would start again.
(Source:  Anton Chekhov: a life)

Find out more about Anton Chekhov at wikipedia. 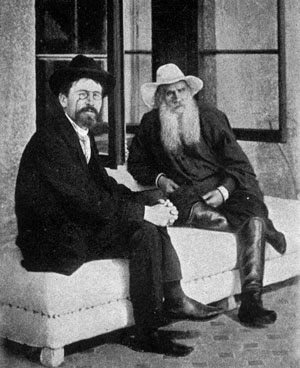 Chekhov chats with Leo Tolstoy in 1900 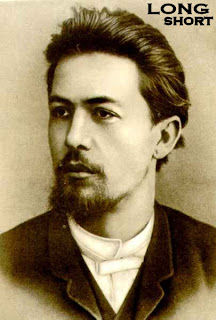 Perhaps he wrote "The woman and her little dog" with the doxie in mind....or at the very least a doxie was his muse