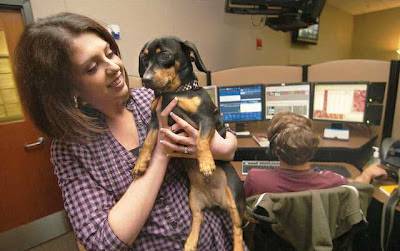 Dachshund 'Holly' with Communications Officer Sloan Archer
Call 911 in Hall County, Georgia, and you never know - smooth black and tan 'Holly' might just answer the phone - or at least she might be on the lap of the 911 operator.  Holly had spent months at the county animal shelter being nursed back to health after being rescued from an animal cruelty case - pregnant, and malnourished, with her hair falling out.  Hall County Public Safety Director Marty Nix had intended on fostering her at the 911 Center, but of course Holly soon found a permanent home there.  Excerpt from The Gainesville Times:
“She really likes it here,” Nix said. “She brings a lot of joy to the people here.”
There are employees working at the 911 center 24 hours a day, and Holly enjoys making her rounds through the different offices to welcome workers at the beginning of each shift.
“We have people buying her different treats and toys,” Nix said. “It’s hilarious.”
But Holly isn’t the only one who has benefitted from the new arrangement.
Sandra Clark, quality assurance coordinator with Emergency Medical Dispatch, said she has especially enjoyed having Holly around the office. She has bought her little outfits and toys and takes her to the Laurel Park dog park to play with other dogs.
“She’s the joy of dispatch,” Clark said. “She’s just done wonders for this place."

Read all about Holly and see 3 photos at The Gainesville Times.

Slightly Related:  The Dachshund Who Called 911
Posted by Rowdy and Bette at 8:13 AM

That is so cute and heart warming. Holly will never be a lonely dog again, with all her friends and more to meet when she goes to meet the kids. Way to go Holly.