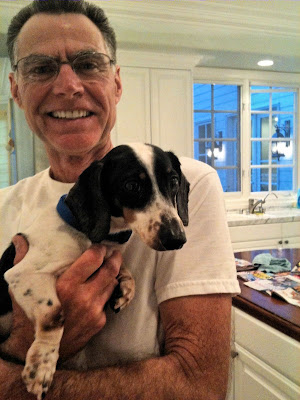 Photo Source:  Denise Richards on Twitter
Wait a minute, that isn't Denise Richards, former fashion model, ex-wife of incorrigible actor Charlie Sheen, actress, and star of such films as Starship Troopers, Wild Things, and The World Is Not Enough....it's her Dad!  But that is her new 3-year-old smooth black and tan piebald rescue Dachshund named 'Moby.'  Excerpt from PEOPLE Pets:

Already mom to at least seven pups — Rose, Lulu, Sara, Hank, Tina, George and Lucy to name a few — actress Denise Richards could seriously start her own doggie daycare business. But ever the animal-lover, she welcomed another rescue pup into her home last week: a dachshund named Moby.
"He's a very sweet, loving dog," Richards tells PEOPLEPets.com. "He's part of the family already." 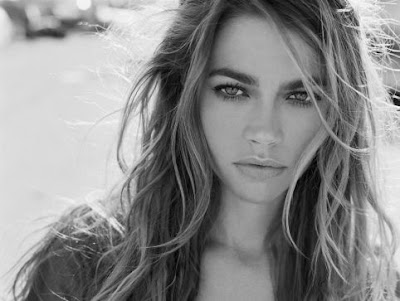 Denise Richards from her official site
Posted by Rowdy and Bette at 9:09 AM

Cuddles to you, Denise for opting to adopt rescues. They will have a good life I'm sure!!!.

I still think she's not the sharpest knife in the drawer - but my opinion of her just went up a couple notches! WTG!

She has 8 dogs? At what point does a person cross the line from dog lover to hoarder/collector? That is a lot of dogs, especially considering she also has 2 little girls under the age of 6.

I think she was on the Dog Whisperer with her pugs awhile back. I hope Cesar left everything well balanced! Cute doxie!