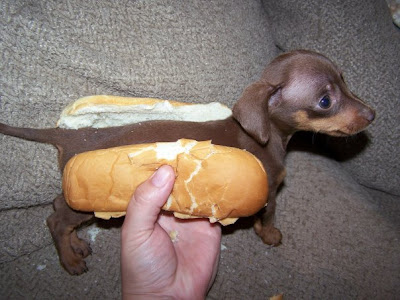 photo source: unknown viral photo
One of our many alter egos, the hot dog, errr, the Dachshund sausage has been roasted all over the news this week.  So today, a cold and blustery Friday, February 26, 2010, we bring you our first ever Hot Dog News Roundup.  Hungry?
Kicking things off, The American Academy of Pediatrics has recommended that hot dogs be redesigned to make them, well, less sausage-shaped. This is because they account for around 17% of the food-related choking deaths of up to 77 children, and the emergency treatment of 15,000, in the United States every year.
"If you were to take the best engineers in the world and try to design the perfect plug for a child's airway, it would be a hot dog," Gary Smith, director of the Center for Injury Research and Policy at the Nationwide Children's Hospital in Columbus, Ohio, told USA Today.  Source.
We're just hoping that no one wants to "redesign" us Dachshunds.  We're perfect just the way we are.  Except for those troubling back issues. 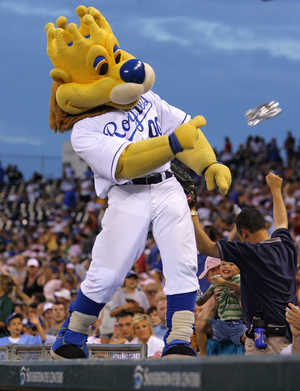 Meanwhile, in Kansas City, Missouri, a Kansas man is suing the Kansas City Royals after their team mascot, Sluggerrr, seen here, threw a hot dog into the crowd last September, which struck the man's left eye, detaching his retina and causing cataracts. Court records said the man has since undergone two surgeries and has suffered permanent vision impairment in his left eye.  Ouch.  Source.

And finally, in the "world's oldest wiener' department, Feltmans Restaurant on New York's Coney Island was set to be demolished, when "archaeologists" said they found an ancient hot dog encased in ice under the building. They also said they "found" an original receipt in the block of ice.  Turns out it was a hoax, but CNN and other news stations believed it, as seen by this priceless video evidence (CNN has removed the video from its site).  Watch it quick before "the man" takes it down.
Note:  140-years-old or not, we would still eat that hot dog.
Posted by Rowdy and Bette at 9:44 AM

The roundup's a great addition to the blog! We love it!
Gotta go eat....

Wow, who thought a hot dog could damage someone's eye?

That little dach puppy in the bun is sooooo cute! I saw it on google images one time and on the picture the words "I asked him to make me a hot dog... this is not what I had in mind" were on it. I remember when m7y little dachshund puppy was that little. They're so cute at a young age (and adult age!) So adorable!