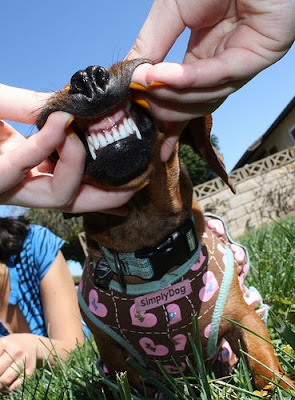 RAWRRRRRRR. by flickrer trish//gross
February is Pet Dental Health Month, and Dachshunds are in the top breeds of dogs to suffer from periodontal disease according to new data released by Banfield Pet Hospitals.  That's a list we DON'T want to be on!  Excerpt from dvm360:

Read all the troubling stats at dvm360.  Time to make that appointment.
Posted by Rowdy and Bette at 8:45 AM

My vet has been telling me this for years. I brush my 3 dashies teeth every night, then rub their gums with a refreshing gel and then spray mouth with a mouthwash. (mouthwash and get are Oxi-Fresh Products for Pets). It really does make a difference with their breath too. Every 2-3 yrs I get them cleaned professionaly by vet. My dachies never had to have tooth extractions because of their oral hygine. Trust me it is not a vet gimmick as some people think.
PS: The schnauzers should be included in this list too.

I learned the hard way about my baby's teeth only after having her for one year. 13 teeth removed!! Now we have yearly cleanings and brush every other day. Please don't think bones and chew toys alone will take care of their teeth and gums. ALWAYS,ALWAYS get the vet to check!

What do you do when your baby is 15 and too old for anesthesia? I brush them but I can see it is getting nowhere.
I am so afraid it is a losing game and I know what I am going to lose.

Hey Marene - you could see if someone in your area does non-anesthetic cleaning. Basically, they get in the dog's mouth and scrape the best they can without the dog being under. The dogs hate it, but it might be an option. Seems to work well if there are no advanced issues.

Hi Marene, as Joey and Maggie suggested try asking around. I know some groomers do this dental service. I bring my 3 dashies to get nails clipped and she also has a full kit to clean and scrape pets teeth. You might want to check into doggie dentists who do not use anesthetic. There are some of those too. Good luck