Dachshunds On A Walk Get Movie Role! 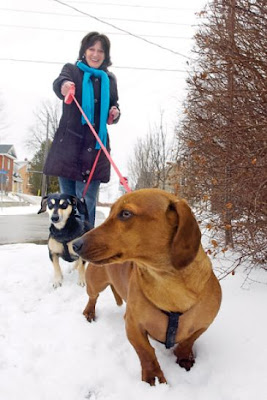 This is just another good reason to take your dogs on a long walk every day - you never know if they might end up in a major film!  Meet 'Hamish' (foreground), and 'Rosie,' and their human Jill Kellie, who hail from Newmarket, Ontario, Canada.  While on the way to the dry cleaners on Tuesday, they were stopped by filmmakers working on the upcoming film Dream House, starring Daniel Craig and Naomi Watts.  Excerpt from York Region:

Before she reached the dry cleaners, the Newmarket resident heard someone call after her.
"All I heard was someone yell, 'Get that woman with the dogs,'" she said. "I thought they were yelling at me because I ruined the shoot. I was expecting them to ask me to move."
But instead, film crews asked Mrs. Kellie to stay and asked the two tiny dogs to attack.
Film crews wanted to catch the dachshunds going after a large Doberman pinscher.
"Bickering with another dog is no problem for them," Mrs. Kellie said. "(Rosie and Hamish are) totally into that. They think they're great Danes."
For a little more than an hour, Rosie and Hamish attacked and re-attacked the large dog.
"It was about four or five takes. They were very patient waiting for the director to yell, 'Action," Mrs. Kellie said. "They knew exactly what to do. They did the same thing every time and never got bored. They're a bit exhausted today."

Read all about these lucky dogs at York Region.
Posted by Rowdy and Bette at 9:18 AM

Now they need an agent.

That is fabulous! I think the best part is that they understood the "attack" command :)