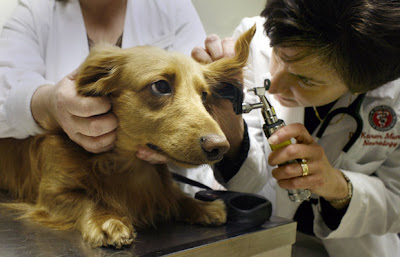 Meet handsome 4-year-old longhair 'Brentley,' who hails from Cary, North Carolina.  Brentley began suffering seizures last year, and is now taking part in a nationwide study at N.C. State's College of Veterinary Medicine to determine the effectiveness of a new drug to treat the common neurological disorder.  Excerpt from the News Observer:
Dachshunds are among the breeds most likely to have the chronic neurological condition, which is characterized by recurring seizures.
Only one anticonvulsant drug, primidone, is approved for treating the disorder in dogs. . The other option, phenobarbitol, works well for humans, but it isn't approved for dogs. Either drug can cause excessive drowsiness, lack of coordination and, in some instances, toxicity to the liver.
A veterinary pharmaceutical company that the study's administrators declined to name is sponsoring the clinical trial on a new, unnamed dog epilepsy drug, hoping for approval from the Food and Drug Administration.
"This drug has been tested before," said Karen Muñana, a veterinary neurologist at N. C. State and investigator in the trial. "But we still don't know how safe it is in dogs with epilepsy, or really how effective it is."
Several hundred dogs have been enrolled in 30 centers nationwide since the trial began two years ago.
We're so proud of Brentley for taking the lead to fight this disease.  Read more at the News Observer.
Posted by Rowdy and Bette at 8:29 AM

our now 10 year old Dachshund began having seizures about 4 years ago. First evry 6-8 months, then every 2-3 month, progressing to 3 seizures in one week. After talking to the Vet about drugs we started googling "seizures in Dachshunds" and came accross some postings that mentioned food being one of the culprits. Our dog has been feed dry-food purchased from the vet's office all his life.
We switched to "Blue Buffalo" (which was mentioned in the posting) about 14 months ago and he has not had any seizures at all since the switch. Just something to try and see if it works before going to the drugs. I did not believe it would work and was genuinly surprised.