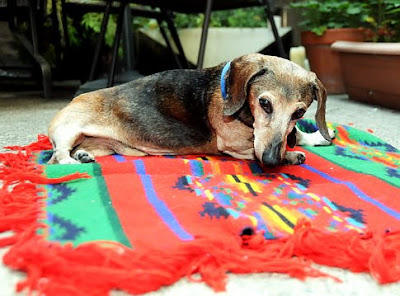 Photo source:  New York Daily News
It's with a heavy heart that we report the passing of 'Paco Sosa,' Manhattan's oldest dog.  Via PR Newswire:
NEW YORK, Feb. 16 /PRNewswire/ -- Paco Sosa, a dachshund who turned 20 last September, and whose strong spirit had cheated death several times in recent years, passed away on February 12.
According to his companion, filmmaker Bernadine Santistavan, Paco acknowledged his readiness to depart, and reassured her it was time to let him go.
For Dr. Thalia Goldberg at Park East Animal Hospital, Paco had a "special soul." Yet stories of animals communicating with their human companions aren't rare. Today's growing awareness of animal psychology has meant a greater ability to read their clues, narrowing the human/animal conversation divide.
In pursuing a greater closeness with -- and understanding of -- Paco, Bernadine was encouraged by the Pueblo Indians of northern New Mexico. "They view animals, and in particular the wolf, as great teachers," she noted, adding, "Paco was a wolf in dachshund clothing."
An early lesson Bernadine learned was that of conquering irresponsibility, by taking care of the young pooch. Patience and dedication are other virtues she thanks Paco for. On average, she devoted four hours a day to meet the special needs of her aging dog, including dispensing medication, cooking special foods, massaging his arthritic body and, Paco's favorite activity, walking in Central Park--once a 30-minute task now requiring two hours. Paco gifted her with many other important lessons in his golden years, among them, compassion for the elderly, selflessness and unconditional love.
Listening marks yet another hard won wisdom for the caretaker. This past year, each time Paco had a seizure, he "came back with a new way of talking to me, so I needed to be very present to re-learn what he was communicating," she said.
But perhaps the dachshund's greatest teachings were the importance of living and dying with dignity – and that "all life is precious," per Bernadine.
Paco's departure will be mourned by many New Yorkers. "People of all backgrounds, from the homeless to Upper East Side society, would stop Paco on the street every day and literally bless him," recalled the New Mexican-turned-Manhattanite.
Paco Sosa departed peacefully in the company of Bernadine and her partner in dog care, Horacio Sosa. As a farewell gift, Bernadine sang him his favorite song, Hound Dog, after which both loving "parents" kept their promise not to shed one tear as Paco Sosa drew his last breath.

Related:  New York's Oldest Dog
Posted by Rowdy and Bette at 8:39 AM

wow. i can only hope baxter stays with us that long. rest in peace, treasured fella.