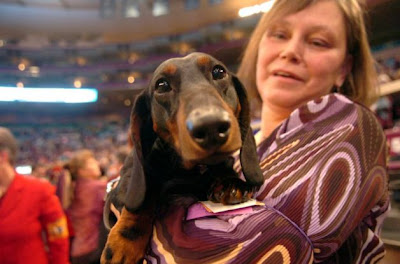 After missing the cut, Joey barked and ran deliriously in circles as his handler directed a red laser beam along the floor.
"He loves to chase laser lights," McKenney said of Joey.

Read about some more Dachshunds who didn't make the cut at the Danbury News-Times.

Oh Westminster, so much to answer for.
Posted by Rowdy and Bette at 8:37 AM

I love this dachshund! Well, I love all dacshhund, but this one is especially impressive. I live in the town next door (Shelton) and would love to add him to my portfolio at www.davechoate.com.

Just look at those puppy brown eyes. They are heart melting. I am now in love.

Ducky and Hendy in Mozifornia said...

You just haven't earned it yet, Joey. :)

We'll have to add this to our Moz-Doxie Dance Party in honor of him!

We laughed so hard when we read that Ducky and Hendy!