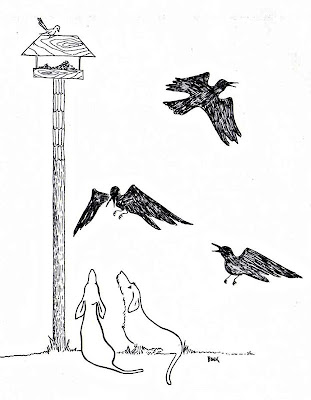 This is another for the birds!
There is, at Tribairn, the Tallest Bird Feeder in the Country - nay, in the World! The top half of the 5-foot post is covered with steel lawn edging to discourage feline predators from gaining access to the hordes of birds who visit the feeder daily in the winter months.
Little did we realize at the time we placed it that our Dachshunds too would need their Predatory Urges curtailed and restrained. Since all of them have a disgraceful tendency to run to fat, we feed - according to the Dachshunds, a terribly inadequate diet, and they must augment it with any small creature slow or stupid enough to be caught and - I'm sorry to say - bird seed, if nothing better is available.
Their modus operandi is as follows: They sit directly under the feeder, very still, eyes raised expectantly until the feeder is full to bursting with squabbling birds. Then they sound off with a shattering volley of barks. The noise sends the birds into frantic flight, and, in the melee, a good bit of seed, peanuts, suet, and raisins get scattered. The Dachsies down these as fast as possible, then repeat the routine as long as they can!
At least they did.
They had a good thing going for them until one Dreadful Day last week when they were, as usual, engaged in the Nefarious Project.
Three large (my gosh but they're big birds!) crows had discovered the largesse and were greedily helping themselves when these two pica-afflicted Dachshunds let go with their racket.
The crows leaped skyward, then descended again - but not to eat! They swooped, in relay, on the dogs. Swish, flap, peck, and off they went.
After about three seconds of this unexpected sort of thing, the Dachs tucked tails and tore for haven. Screeching like leaky calliopes, they came.
Since then, both of the Dachshunds avert their eyes with exemplary dignity when they pass (hurriedly) by the feeder.

via fhe American Dachshund magazine, September, 1968.
Posted by Rowdy and Bette at 8:41 AM

This story is exactly why I visit this blog several times a day. Thanks so much for finding these little gems and sharing them with us.

kep used to love scarfing up the birdseed, too. what a great story!