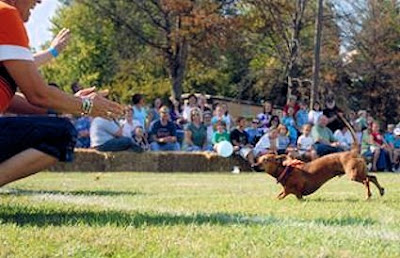 Twenty-four dachshunds from all over Southern Illinois and Missouri raced on Saturday as a part of Kid's Fest, an activity filled day for children and families that helped raise money for Children's Medical Resource Network of Anna, Illinois. Can we get a woof? Above, red smooth 'Wilson the Wonder Dog' has a little trouble finding his owner at the finish line, but still qualifies for the championship race.
'Wilson' was born with deformed foot, but that has not kept him from racing for the top. He lost to 'Jack' by a matter of inches in his game-plan of chasing the winning weiner dog.
"He (Wilson) is a champion no matter what. We're proud of him," his human said.
Read all about the event, including more wiener tales at The Southern Illinoisan.

The Southern Illinoisan seems to be big a dachshund supporter with plenty of fun tales. Here are a couple of other off-beat stories from them over the years:

Dachshund Lovers Kicked Out of School!
Posted by Rowdy and Bette at 8:21 AM

I like wiener races. My mom ordered me the Wiener Takes All DVD. It sould be here this week. I will tell you what I thought of it.

Sounds great Ruby! We've seen it, it's pretty fun. If you want to do a review to post, that would be cool! You can email us at cbording@gmail.com