We're still trying to catch up after a busy week around the House of The Long and Short of it All, but here's a dachshund news roundup on a soon-to-be warm and beautiful fall day, Saturday, Dachtober 11th, 2008. Above, don't miss the Savannah Now news video from last weekend's annual Wiener Dawg Races that were part of downtown Savannah's Oktoberfest celebration. The staff at lowdogworld attended the event, and they've got links to lots of photos and several nice recaps, don't miss it. 'Longfellow,' the 3-legged inspirational champion from last year, returned to defend his title, but he's such a gentleman that he let another dachshund win this year. 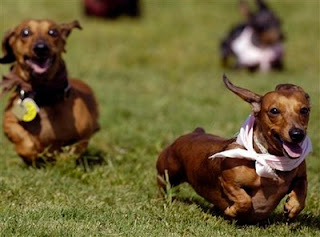 A crushing defeat: Dachshund 'Molly,' right, cuts in front of last year's winner 'Longfellow' to take one of the top three spots in a run off during the Annual Savannah Weiner Dawg Race on historic River Street, Saturday Oct. 4, 2008 in Savannah, Ga.(AP Photo/Stephen Morton). Source.

In the "news we don't like to hear about" department, 'Bullet,' a German Shepherd police dog killed a dachshund named 'Gracie' in Nitro, West Virginia. Gracie was in her back yard doing her business, and Bullet was on the hunt for fugitives. Police say that Gracie charged and jumped at Bullet, and that Bullet "did what he's trained to do - protect himself and his master," but Gracie's owner says the attack was unprovoked. Sad all around. City officials have offered to pay Gracie's $700 vet bill and find Burdette another dog. Read more at the Charleston Gazette. Our hearts go out to Gracie's family and friends.

There ARE a couple of stories in the "news we DO like to hear about" department though, including a harrowing tale with a happy ending of 5 dachshunds caught up in the path of Hurricane Ike, and who are now being lovingly tended to by Diamond Dachshund Rescue of Texas, near San Antonio. Excerpt from the Kerrville Daily Times: “The dogs were outside and were washed over the 4-foot fence,” said Christine McEntyre, who has taken in the dogs at her facility, Diamond Dachshund Rescue. “They apparently swam a distance together, and got onto something to get out of the water.”The five dogs — three females and two males — gently were rounded up by an animal search and rescue team and were brought to the safety of the Beaumont Humane Society.
The dachshunds — although their specific ages are not known, range from very young to old — were covered in black sewage and salt brine.
“All are understandably uncertain of what’s happened in their lives, but they are all really sweet dogs that seem to be very personable, like laps, dislike cats and bark at the goats at my house,” she said. Read more at the Kerrville Daily Times.

In other good news, the City of Tonawanda Fire Department in Tonawanda, New York, was called into action Friday morning to rescue a daring dachshund that escaped from its Broad Street home and jumped into the Niagara River. The dog was nearly 300 yards offshore and heading toward Tonawanda Island when firefighters aboard an inflatable boat plucked the pooch from the 62-degree water. Read all about it the Tonawanda News. 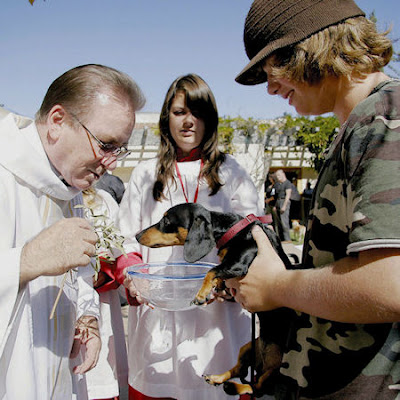 ALL GOD'S CREATURES—Brooke Bayles, 14, center, holds the holy water for Rev. Steven J. Dean as he leans down to meet the gaze of Ingrid, a 1-year-old smooth black and tan carried by Michael Look, 13, of Simi Valley, California. Community members brought pets of all shapes and sizes to St. Francis of Assisi Episcopal Church's annual Blessing of the Animals on Sunday. Source. 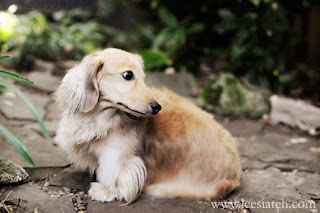 If it's beautiful photos of dachshunds and dogs you're searching for, look no further than the photography of Leesia Teh. She recently photographed 'Emah' the English Cream, seen above, and then did a spread on Emah's dachshund family: Josh, Meah, and Braxton. The foursome's human is interior designer Edward Holifield. Don't miss these pics! 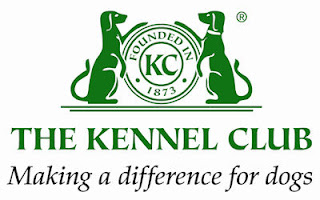 Finally, this week the two leading dog organizations in the UK, the welfare charity Dogs Trust and the Kennel Club announced that they will be calling for Government support for an independent review into the registration, breeding and showing of dogs to ensure their long term health and welfare.
This follows the airing of the BBC's program Pedigree Dogs Exposed, and subsequent potential loss of support from various organizations for the prestigious Crufts Dog Show.
The review will be set up and funded by the Dogs Trust and the Kennel Club since the priority of both organisations is to promote and support the care, welfare and breeding of healthy dogs.
Said Clarissa Baldwin, Chief Executive, Dogs Trust: “We believe an independent review is essential in coordinating the large body of research and evidence and to advise on workable, timely recommendations for ensuring the future good health and welfare of all dogs.”
Said Caroline Kisko, Kennel Club Secretary: “Work is already underway to improve the health of pedigree dogs. An independent review will assist us in meeting our objective, which is to improve the welfare, health and general well being of all dogs, throughout every stage of their lives. We hope the Government can support us”. Source: The Kennel Club.

Related: The Quest for the Perfect Dog

Thanks, Maggie and Joey, for the big news roundup. I didn't know how much I looked forward to your postings until you took a few (well-deserved) days off.

Great blog you have here! My husband I enjoyed reading it this morning. Thanks for stopping by my blog, as well. : )

hey, thanks for the shout out! love your blog, btw. :)