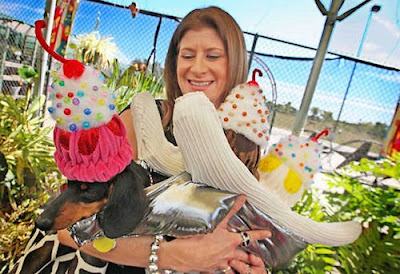 Proving once again that no other dog is as delicious as a dachshund, here's a dachshund news roundup on a much colder fall day, Monday, October 27th, 2008. Above, smooth black and tan 'Lily' wasn't too happy being dressed up as a banana split, but her owner Sharon Flowers was all smiles when she learned that they won first place in the Pet Halloween contest held at Northside Ranch, Pet and Garden Center in Victoria, Texas on Saturday. "My husband thinks I'm crazy," said Flowers, laughing. "It's just fun." Read more about Lily and the event at the Victoria Advocate.

In the "news we don't like to hear about" department, two dachshunds and one other dog were attacked by bees and killed in Palm Beach County, Florida. 70-year-old Nancy Hill was walking her two dachshunds when the bees swarmed all three of them. Hill was treated at a hospital where doctors removed the multiple stingers, but the dogs died. The bees also attacked two other dogs in the neighborhood. One of those died and the other was injured. Our hearts go out to Mrs. Hill and all the families affected. Read more at North Florida News Daily. 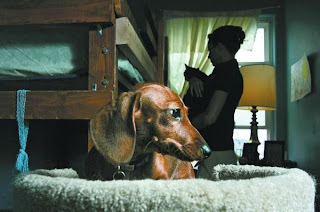 In the "news we DO like to hear about" department, the YWCA Women's Support Shelter in Tacoma, Washington, is not only a refuge for women facing domestic violence, but also their pets. Above, this woman shares her room with 2 cats and this handsome red smooth. This YWCA is one of five domestic violence shelters in the country recognized by the American Humane organization for its pet-friendly policy. The YWCA reports that many victims of domestic abuse say that they are worried about leaving their pets behind if they leave home. Read more at The News Tribune.

Hundreds flocked to Veterans Park in College Station, Texas, on Saturday to Brazos Animal Shelter's 2nd annual Wiener Fest, which included a one mile "high tail it through the park," as well as a costume contest. You can watch a news video of the event at KBTX.com.
Related: Dachshunds To Watch Out For: Meet Flip 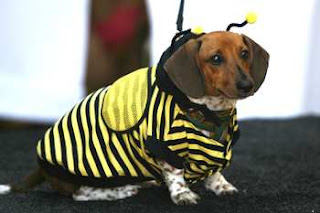 And finally, speaking of bees, this red smooth piebald wouldn't hurt a flea! Susan Hull's dachshund, 'Wally,' is dressed as a bumblebee for a costume contest at The Barkery on Balboa Island, Newport Beach, California on Saturday. Read all about the event at The Daily Pilot.

Have a great Monday!
Posted by Rowdy and Bette at 7:57 AM