A Note From Joey and Maggie: Halloweenie Gala! 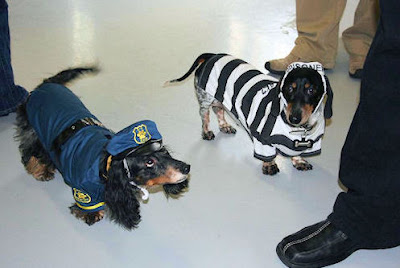 We hope all you dachshunds are enjoying 'Dachtober' as much as we are! We attended Chicago Dachshund Lover's 4th Annual Halloweenie Gala yesterday, as Maggie the Canine Cop and Joey the Jaildog. We came in 2nd place in the 'funniest' category! Woof, Woof! There were ribbons awarded for scariest, cutest, funniest, most original, and a 'People's Choice' category, where the attendees voted for the dachshund with the best costume. The People's Choice winner, as 'Plato,' seen below, won the special dachshund pumpkin!
There were over 60 dogs and puppies running around, and people brought lots of potluck food, drinks, dessert, beer, and doggie snacks for us hungry dachshunds. There were even door prizes....some Etta Says dog treats and a dachshund picture frame! Enjoy some hilarious photos from the event from our doxie pals Sampson, Tommy Lee, and Gina Marie. (click any photo to enlarge)

O my gosh, how adorable are you guys? And personally, I think you are first place winners, all the way!

You GUYS! Too cute! And I see your blog is bringing the excellence every day - how do you do it? We here at the Museum are in awe.

Thanks three dogs long and curator. It was a fun event, and we were happy to get 2nd place!