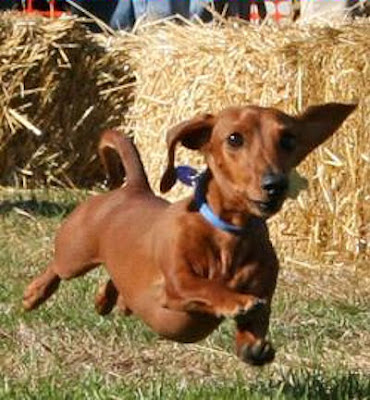 Our favorite month of the year continues! Above, 'Buster' was one of many dachshunds that participated in the Weiner Dog races Saturday at the Dan Patch American Legion during Oktoberfest in Savage, Minnesota. Buster didn't win, but he sure looked good coming down the stretch. Buster is owned by Bradley Linnell, who was at the races representing "Dachshunds Making a Difference!" The $10 entry fee paid by participants who brought their dachshunds to the race were donated to the organization. Source. 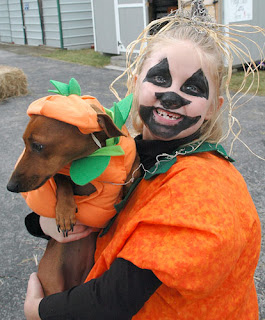 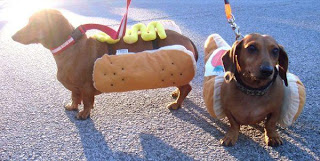 Hot Dogs: Bellaire’s second Howl-o-ween dog costume contest, parade and expo attracted more than 30 generally well behaved pooches of all sizes and bloodlines in Bellaire, Texas. Small dog-fright category winners were these "wiener dogs" because, according to judge Ezra Charles, thinking about what is in hotdogs is truly scary. Source. 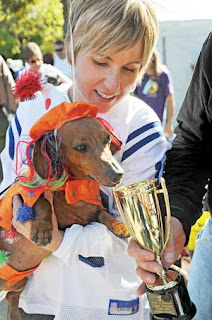 Clowning Around: Kevin Randall holds the People’s Choice trophy out for his red smooth 'Maggie May,' held by his wife Michelle Randall at the second annual Howl-O-Weenie Doggie Costume Contest in Rome, Georgia. The contest drew 31 contestants and raised $600 for the Rome-Floyd County Humane Society. Source.

What a great site. I am thinking about getting a wiener dog in January, a short hair milk chocolate color. I just found the cutest wiener dog clip I have seen in a while:
http://www.dogwork.com/hotdogcart