Dachshunds Around the Globe 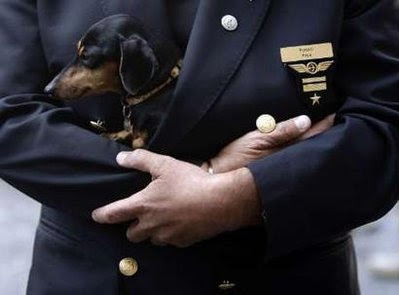 What a cutie. An Alitalia pilot holds his little dog under his jacket in front of the Montecitorio Palace in Rome September 26, 2008. German airline Lufthansa met Alitalia's unions on Friday to discuss a possible stake in the struggling airline as Italy pushed to wrap up labour talks to seal an investor bailout. REUTERS/Alessandro Bianchi (ITALY) Source.