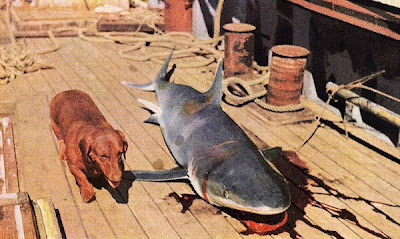 Here's a sight you don't see very often. And wait, that's not just any dachshund, that's 'Scaphandrier,' one of Jacques Cousteau's dachshunds. From an old National Geographic magazine, the text says: Ship's dog yapped at first shark hauled aboard, but soon grew bored at the sight.

In a related story, thanks to 'Clancy' for the tip about this non-dachshund newsmaker, where a Florida man dives in to save his dog from a shark attack, and punches the 5-foot shark until it lets go of his rat terrier 'Jake.' Read all about it at msnbc.