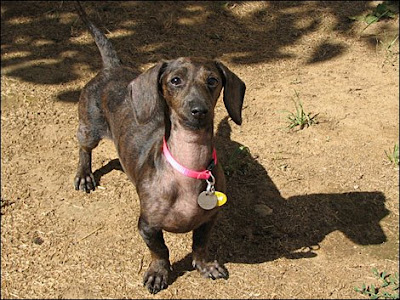 Meet beautiful brindled 'Dolly.' If you're looking for a story about dachshund inspiration, a story about a severely neglected dog nursed back to perfect health, Dolly delivers. We're only going to post small images of Dolly's "before" photos because frankly, they are difficult to look at, but you can click on them to enlarge them if you wish. But boy what a happy ending for this wonderful girl. This is a press release courtesy of Multnomah County Animal Services.

When Dolly the Dachshund arrived at Multnomah County Animal Services (MCAS), she exhibited signs of severe animal mistreatment and neglect. But despite her obvious medical problems, MCAS staff and their veterinary hospital team were immediately captivated by Dolly’s spirit.
“She was in pretty bad shape when she arrived at the shelter, with a severe case of mange,” said Dr. Meghan Romney, head of Shelter Medicine at Multnomah County Animal Services. “Everyone who cared for her was touched by Dolly’s sweet disposition and spirit.”
An animal care donation fund is being re-named “Dolly’s Fund” to help finance medical care for animal patients like Dolly. “We see dozens of neglected and mistreated pets like Dolly every year, some in very serious condition. Concerned pet lovers can contribute to Dolly’s Fund to increase our ability to treat more homeless pets in our shelter hospital,” says Mike Oswald, director of Multnomah County Animal Services.
Multnomah County Animal Services’ animal hospital medical team triages every one of the nearly 10,000 pets that are cared for each year at the shelter. Last year MCAS officers investigated 279 animal abandonment cases and 704 animal abuse/neglect cases.
“Dolly is expected to make a full recovery, thanks to the efforts of our medical team. And Dolly’s Fund will have a huge impact on our efforts to expand the care of medically treatable abandoned animals,” stated Dr. Romney.
To make a donation to “Dolly’s Fund,” go online at http://www.co.multnomah.or.us/dbcs/pets/ and click on Donations. Contributions can also be mailed to Multnomah County Animal Services, Dolly’s Fund, Box 698 Troutdale, OR 97060. 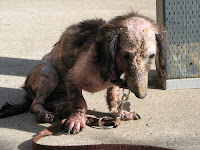 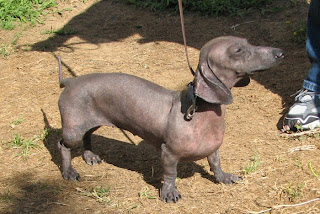 See more photos of Dolly at the press release.
Posted by Rowdy and Bette at 8:48 AM

That 'before' picture breaks my heart everytime...awful.