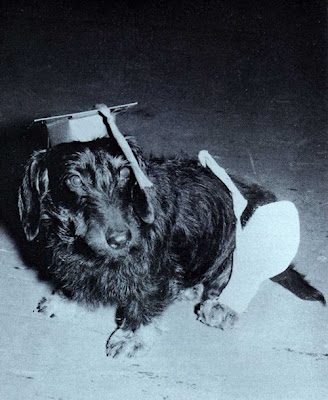 Wirehaired 'Nimpo' graduating from Obedience School
DACHSHUNDS AS COW DOGS
Valued for Their Courage, Persistence, Intelligence
From the May, 1965 edition of the American Dachshund, click on photos to enlarge
Learning to work cows is a part of a Dachshund's life on the Reiss farm at Kimball, Nebraska. So said Mrs. Alice Reiss in a letter largely about Nimpo.
"Nimpo, a Wirehair, is the best cow dog we have had," said Mrs. Reiss. "We have raised dachshunds since 1949 and most of them learn to work cows before they are a year old."
"Nimpo also is our first Obedience dog. But the day before he was to graduate from Obedience school, we were working some cows, and one of them got Nimpo against a snow bank. Nimpo couldn't get over or around, and the cow stepped on his leg and broke it."
"But Nimpo went on to graduate anyway. He took third in the class despite the cast on his leg."
"A week later we took the picture with the cows. It was sort of a standoff, neither the cows nor the dog willing to give ground. After the picture, we helped Nimpo, making the odds more even."
"We usually take a dog along in the pickup when we bring in the cattle from pasture. When we get out where they are, we let the dog out and honk the horn, and the dog rounds up all the cows and starts them for home."
"The dachshunds go along when we use horses, too, and they keep up better than you might expect. But if we have the horses, the dogs are more apt to run onto a rabbit and take time out for a small hunt."
"They are a big help moving cows from one corral to another or putting them in the chute for branding."
"It would be hard to get along without a Dachshund around to help. There are other breeds that make good cow dogs, but we have never found any with more courage, persistence, and intelligence than the Dachshund."
"Nimpo is a grandson of Dachs Park Chocolate Soldier, a Ch Brentwald Joshua son."

"A standoff, neither the cows nor Nimpo willing to give ground"

Related: Dachshunds To Watch Out For: Ziggy Boy

If you enjoyed this dachshund tale, we bet you'll love: Wieners in History: Dachshund Face on Barroom Floor
Posted by Rowdy and Bette at 7:51 AM