Is It Bee Season? 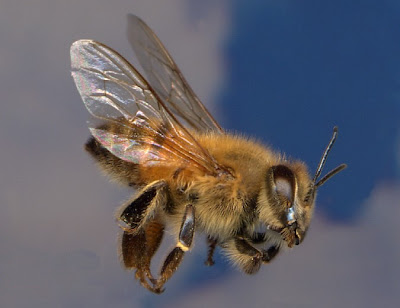 Africanized Honey Bee
The bees that pollinate our fruits and vegetables, the cotton for our clothes, and the plants for the habitats of animals all over the world are vital to our existence. The current alarming decline in the population of bees could collapse our world as we know it. As Albert Einstein said "If the bee disappeared off the surface of the globe then man would only have four years of life left. No more bees, no more pollination, no more plants, no more animals, no more man." Source.
But bees aren't always a dachshund and dog's best friend. Yesterday we reported the unfortunate tale of 2 dachshunds and another dog that were killed in a bee attack in Florida. No sooner had the ink dried on that story when another story surfaced out of Meyerton, South Africa, where a dachshund and a pet monkey were killed in an attack, and a man is left in critical condition.
What can dog lovers do to protect their furry friends from bees and wasps? Check out the nice instructions, tips, and warnings over at eHow.com. Also, check out a general article on insect stings over at Dachshund.org.
They say bad things happen in 3's, and we don't want to hear another unfortunate tale of bees and dachshunds! Let's live in harmony with our buzzing and sometimes stinging flying friends.
Posted by Rowdy and Bette at 7:29 AM