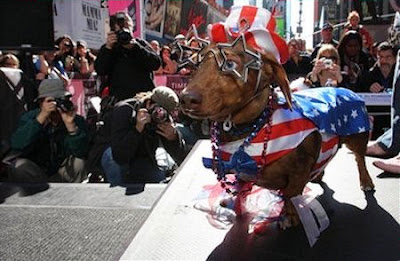 Proving yet again that your dachshund is your friend until the bitter end, here's a dachshund news roundup on a cool and cloudy, yet thankfully dry, Monday, Dachtober 20th, 2008. Woof! Above, 'Bosco,' a red smooth owned by Risa Castagno of the Brooklyn borough of New York, competes in the fourth annual Times Square Dog Day Masquerade canine costume contest Sunday Oct. 19, 2008 in New York's Times Square. The event was held to raise awareness for Animal Haven's Adopt-A-Pet program.(AP Photo) Source. 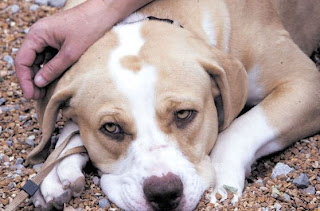 Tissue alert: Now, we try to stay focused on the dachshund around these parts, but this special boy named 'Truman,' an American bulldog/Staffordshire terrier mix, knows all about the friendship and love of the dachshund. See, he and his female dachshund friend were dumped at the side of the road, and the dachshund was hit and killed by a car. Truman also appeared to be hit by a car, but he sat by the body of his companion for 3 long days until animal control was able to pick him up. Excerpt from The Telegraph out of Alton, Illinois: "We tried to help him, but he ran from us," Jackie Spiker of Hope Animal Rescues said about the dog they named Truman because it means "loyal one."
"Due to the dangerous location of the roadway, we had to abandon our attempts, so as not to chase him into the road," Spiker said. "We covered the little (dead) dog in a blue blanket and carried her farther into a field away from the road. The bigger dog watched us the entire time but would not come near us."
"He did not leave. He lay where she used to lay and remained there until Tuesday morning, when Animal Control tranquilized him, so that they could catch him safely."
Read the entire account at The Telegraph. 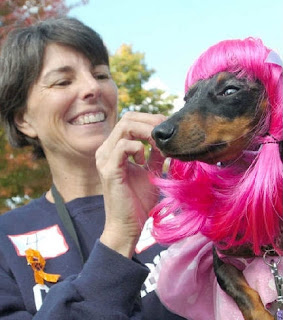 Meanwhile, over in Fort Wayne, Indiana, Ronda Hanning adjusts the pink wig on her 2-year-old black and tan smooth, 'Jacquie,' at the Pet Spook-Tacular sponsored by the Humane Organization for the Prevention of Euthanasia, or HOPE for Animals. Proceeds will help pay for a low-cost vaccine clinic the group will conduct, according to Madeleine Laird, a HOPE co-founder. Read all about the event at The Journal Gazette. 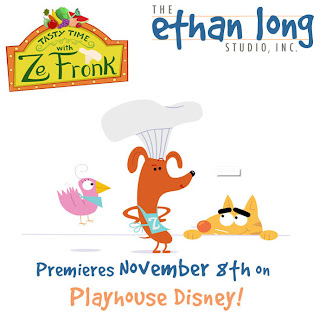 Another image has surfaced of the newest dachshund on the block, 'ZeFronk,' a French Dachshund who hosts a cooking show from his doghouse, Tasty Time with ZeFronk. The animated series will premiere November 8th on Playhouse Disney, so gather up the kids, the grand kids, and the dachshunds so you don't miss it! Visit the artist's website: Ethan Long Studios.

Finally, MARVEL at the BRIO dachshund pull toy, a classic since 1953. It would make a great gift for the youngsters on your holiday shopping list. From about $6 - $100 depending on the size and the store. Much like the real dachshund sitting on your lap, it never goes out of style.

this is really weird story

You have a great blog! The story about Truman and his friend was really heartwrenching... Animals continually amaze me with their loyalty.

Recently I began blogging about disabled dogs, especially doxies. Please check it out and help spread the word!

Joey and Maggie
Wow - I didn’t expect my experimental toy Dashchund video to find it’s way onto a Dachshund blog! Thank you.
If you have a chance to look you will find the Dachshund Version 3 video better - I found out how to get the logo better merged into the background.
On trevorginn.com blog you will also find the same video as rendered by YouTube, Metacafe and vzaar.
Best wishes. Mike HellobabyDirect.co.uk

The most cute photos in one place! Are these yours?