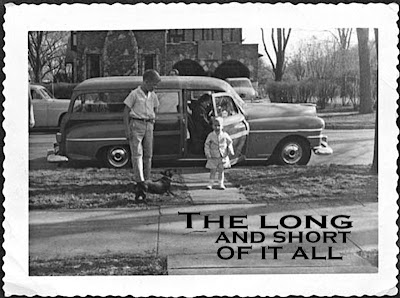 (click image to enlarge)
Yeah, Yeah, Yeah!
By Mary J. Capps for The American Dachshund, May, 1965

Sonny Boy was his name. He was a black and tan Dachshund, and from his ears back he was a prize winner. His stance and body conformation were excellent. He was sleek and properly low-slung, befitting his descent from champions.
Some harm may be done to this loyal, intelligent and beautiful breed by cartoonists and comedians who, from a lack of fresh material, present Dachshunds as a slightly retarded class of dog. But - as disloyal as it may sound - I realize that Sonny was a caricature of the caricature, so to speak.
From his ears forward, he was a mess, both externally and, I suspect, internally! His ears drooped untidily. His nose, though nicely pointed and trim, had a cleft in the center of the snout, which gave it a bulbous "Rudolph The Red-Nosed" effect. But worst of all was his mouth!
His lower jaw protruded so that his teeth were outside the upper jaw and ball-like tip of his black nose. A ludicrous lop-sided grin completed the clownish appearance. He looked like a dog who had borrowed his master's false teeth and, what was worse - was using them!
The one redeeming facial feature was his eyes. Soft, liquid brown, they seemed to overflow with a teary, drunken, overly sentimental love for the world and everything in it. Despite misgivings about his homeliness, these eyes made us accept him as a gift. We promised never to use him for breeding purposes.
Sonny seemed aware of what a terrible first impression he made, and he worked hard, wielding all his charm, to overcome the instant aversion. With visitors his behavior was as erratic as that of a nervous, over-active three-year-old boy. He was determined to win them over, to receive his petting and the few kind words he deemed his just desserts. Only when he heard those words would he go back to his napping or frolicking with the children.
He managed to get this idea across to even the most hardened pet haters. They might be determined to ignore the beseeching eyes of the eager dog who crouched in front of them, muzzle laid across reluctant knees. But useless their efforts to avoid Sonny's limpid, hypnotic stare. For, unless they capitulated - and quickly - all thirty-two pounds of lead-heavy dog would land with bone shattering force across quavering thighs. A habit we were never able to break, because Sonny seemed to picture himself as a dainty, featherweight Chihuahua, designed specifically for lap lolling.
Love, if not blind, at least blurs the vision to the point of making most shortcomings practically nonexistent; so, to the children, Sonny was canine perfection. I was dismayed when I learned they had entered him in the P.T.A. pet show. Full of confidence, they had already cleared off a spot on the peg board for the anticipated blue ribbon.
As much as I loved him, I knew too well the hilarity poor Sonny's appearance evoked and, since I could not magically make him beautiful, I decided that he and the children would not be humiliated by derisive laughter. I dragged out the outgrown Halloween costumes and material left over from school plays, and I went to work.
On the day of the pet show I seemed to be the only one suffering from nerves. Sonny was his usual bouncy, vibrant self, and the children left for school oozing with confidence - in everything but my ability to have Sonny there at the proper time!
I sat in the fifth row of seats, and I crossed my fingers for luck, as the straggling line of pets and their owners started across the stage. But Sonny didn't need my help. From the time he appeared until he reached the center stage, where he stood up on his hind legs (his only trick) to display the Beatle wig, black suit and starched white bib, there were shouts of "The Beatles - Yeah Ringo - yeah, yeah, yeah!"
The shrieking and applause drowned out the announcer's voice, and I knew Sonny was the undisputed winner of the fancy gold rosette ribbon for "Best Pet."
I don't think the children even noticed that Sara Rainey, with her longhaired cat, Snowflake, wont the blue one, for the most beautiful pet.

Slightly Related: Dachshunds in Pop Culture: George Harrison
Posted by Rowdy and Bette at 7:49 AM