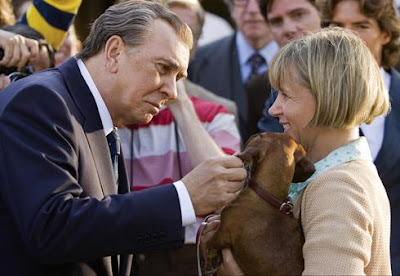 OK, so this isn't actually President Nixon, but rather a scene with Frank Langella, who plays Nixon in the new film Frost/Nixon, released today in the US. The story goes: It's 1977, and disgraced former president Richard Nixon, played mesmerizingly by Frank Langella, has lost his public swagger. He emerges from the final bout in a series of interviews with British talk-show host David Frost looking beaten down and bewildered.
A crowd gathers as he heads for his limousine. Nixon walks up to a woman holding a dachshund and pets the dog, tapping it gingerly, then tugging clumsily on its ear. With this wordless gesture, he conveys a palpable sense of defeat and social awkwardness. Read more at USA TODAY.

Also from LA.COM: Following his last interview with David Frost, Nixon is seen leaving the suburban home where the conversations were taped. Shaken and emotionally vulnerable, he tentatively approaches a woman holding a small dog.
"Is that what they call a dachshund?" Nixon asks the woman in a characteristically awkward moment of public interaction.
Nixon then pats the dog and walks to his waiting car.
"Everybody mentions that moment with the dachshund," says Frank Langella, who plays Nixon in the movie. "It's just 35 seconds, but that's the power of film. There must be something in all of us that responds to that need for some form of contact with another living creature after feeling failure." Read more, including director Ron Howard's take on the scene at LA.COM.

I love this story and posted it on my Obama Dog Blog today...
http://dreamdogsart.typepad.com/the_obamas_dog/2008/12/the-frostnixon-dachshund-moment.html

I still think the Obamas should get a Doxie!!!