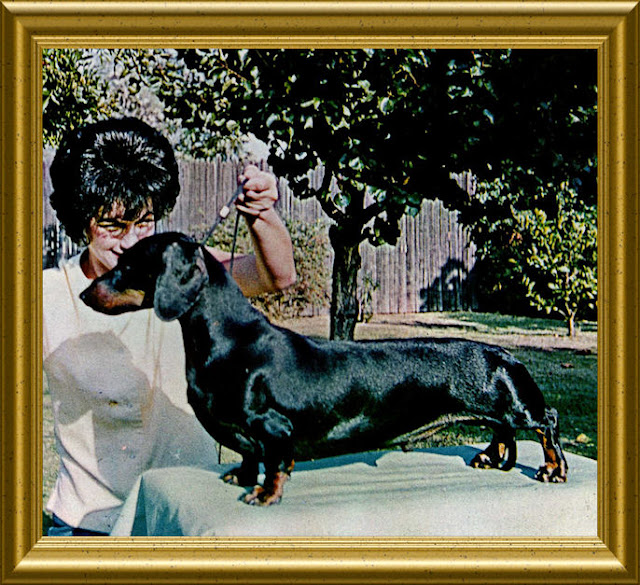 ON THE DAY
by Elise L. Levine for The American Dachshund - Twentieth Anniversary Edition, September, 1959

Upon the bench she howled and whooped
And scratched herself 'most hairless,
So, in the ring, she sure looked pooped...
And we looked very careless.

She hunched her back and dropped her head
And squatted on the table;
Her tail was gay, and I must say
She sure was far from able.

To gait with ease or show with style
Her quality had vanished.
She nipped the judge and said, "Oh Fudge!
Why not? I'm simply famished!"

The hours we'd spent with brush and oil,
The days and days of schooling,
The endless walks and solemn talks,
She must have thought were fooling.

Our dreamed of Champ, the little scamp,
Came home without a ribbon...
She walked on air...SHE didn't care...
'Twas US that took a ribbin'!

We took her home and once alone,
Our charming little sinner
Just posed and stood and moved as good
As any top flight winner.

We're sure that we could win at shows
And none could e'er begrudge 'em...
'Twould not be hard...if OUR BACK YARD
Was only where they'd judge 'em!

Above photo, cover of the January, 1965 American Dachshund: Champion Lucene's 'Lantana' with artist and dachshund lover Jeanine A Sudinski, of Lucene Dachshunds.
Posted by Rowdy and Bette at 8:39 AM

OMG! I lived this poem with my beautiful girl Tess. Thanks for sharing it!