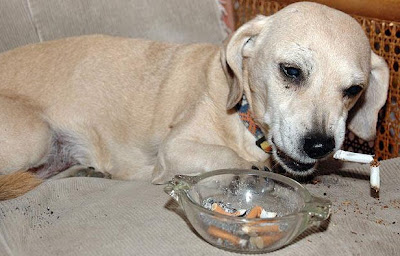 Well, where do you start with a story like this? Meet 22 year old 'General Edi,' who hailed from Graz, Austria. Our hearts go out to his friends and family for their loss. Excerpt from Telegraph.co.uk: General Edi has been munching his way through half a packet of cigarettes every day since he was a puppy, said owner Wolfgang Treirler. But Edi has died after he was hit by a car during a walk to his favourite cigarette shop. Mr Treirler said:"His old owner abandoned him and so we took him in 17 years ago, and noticed straight away that he was in the habit of eating cigarettes.
"He eats the tobacco and the paper, and then chews a while on the filter before spitting it out."
Note that nicotine normally leads to poisoning in dogs. Read more at Telegraph.co.uk.

I don't even know what to say about this...honestly.

Um...what? Why would anyone allow their dog to do such a thing?

This is really terrible. That dog LOOKS like a smoker... but he's also adorable. Le sniff.

But it also points out how all the precautions--and worrying--in the world on the part of us dachshund owners can be for nothing in the end. He was TWENTY-TWO years old, the canine equivalent of a heavy smoker, and what did him in? Being hit by a car!!! It reminds me of the (supposedly true) news item about a health nut who died as a result of choking on a handful of vitamins and dietary supplements.