Junior Handlers Give It Their Best This Weekend 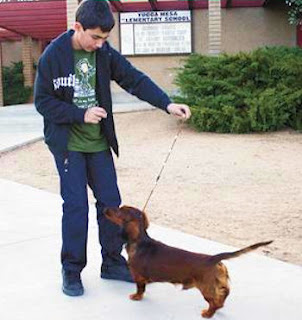 Best of luck to all the dachshunds competing in this weekend's American Kennel Club Eukanuba Dog Show, in Long Beach California. The show will air on Animal Planet early next year. Above, meet 'Prince,' aka 'Hialeah’s Red Corvette V.,' a nearly 2-year-old long-hair, and his human, trainer Ben Gold, 12, of Yucca Mesa, California. Ben had to have five first-place wins and a 3.0 grade-point average to compete, and Ben has seven first-place wins! Way to go! Read more about Ben at the Hi-Desert Star. 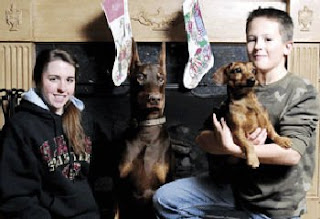 And meet Ashley and Carson Wilde, who will show their doberman 'Spartan,' and dachshund 'Chilidog' in the AKC/Eukanuba Dog Show this weekend, traveling all the way from their home in Lawrenceville, Georgia! "I thought it was really cool to see all the dogs, and since we were getting a wire-haired Dachshund, I thought maybe I would just give it a shot," Carson said. "Dogs are just interesting to me, I like them," he added. Read more at the Gwinnett Daily Post. Good Luck!