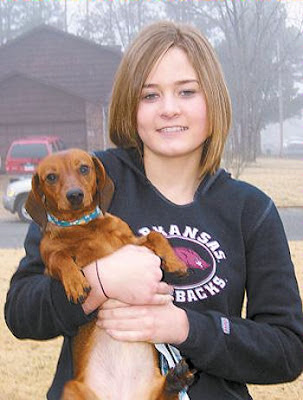 Meet pretty red smooth 'Daisy,' and her human Jessica Cagle, who hail from Carlisle, Arkansas. A fire destroyed their home, and it was thought that Daisy was deceased, but some local heroes changed her fate. Excerpt from The Carlisle Independent: “I knew I had to get as much of our stuff out as I could, before the fire got any worse,” Jeff Cagle said. “I went to the back porch, opened the door and there laid my daughter’s miniature dachshund. It wasn’t breathing so I presumed the dog dead. I picked the dog up and placed it on the ground.”
After returning to the house to retrieve more personal items Cagle said he saw two men over the dog, working with it.
“They gave it CPR and once they got the dog breathing again, they rushed it to the vet in Hazen and put on an IV. I mean, it was a miracle,” Cagle said.
Read more about the family's blessings at The Carlisle Independent.
Posted by Rowdy and Bette at 9:08 AM

Thanks such a wonderful story. The newspaper article's description of the community response to this family was very touching. And what a dachsie rescue story! Melinda