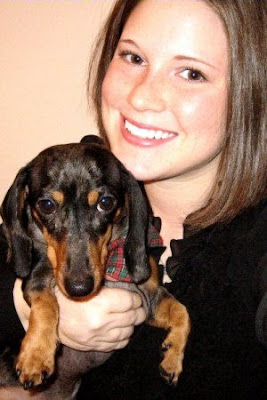 Golden Retrievers step aside, there's a new service dog in town, and his name is 'Sam,' a 4-year-old black and tan dappled smooth Dachshund who "enjoys tearing the stuffing out of toy animals in his free time."  Sam assists his human Amber Cornford, who attends Loyola University in Chicago, Illinois where she is majoring in Nursing.  Amber suffers from chronic pain caused by Ollier’s disease, a bone disorder resulting in tumors in the joints.  Excerpt from the Loyola Phoenix:
Amber was diagnosed with the disease before her first birthday, and since then, she has undergone six limb-lengthening procedures to help her condition.
When Amber experiences pain, she pets Sam to distract herself. At night when her arthritic hand aches, she often rests it on Sam’s chest, and his body heat relieves the pain.
“Instead of taking a lot of drugs that hurt my body, [having a service dog] is a treatment that is less harmful to my body and, in the long term, [it] has less side effects,” said the 22-year-old junior.
While she doesn’t like to think of herself as disabled, Amber said she realizes that her condition limits her physical abilities. She often needs to ask for a seat on the shuttle and public transportation because it is difficult, for her to stand for long periods of time.
Sometimes even walking can be painful, so Sam tags along anywhere and everywhere she goes. From the classroom to the IC, he’s there to assist.
“It’s not a convenience thing,” she said. “It’s what he’s for. You can’t choose when you’re going to have pain.”
Read all about Sam and Amber in a great little article at the Loyola Phoenix.
Posted by Rowdy and Bette at 9:01 AM

LOVE this story and getting to see cute Sam and Amber!! Glad to hear that Doxies help people this way. I don't know what I'd do without mine!!
-Annie

I don't know what I'd do without Baron either...I was in a deep depression after my husband died, Baron was always there to comfort me. He and I have been through a lot together. Sam is a real hero!

Sigh. Dogs rock for so MANY reasons :)