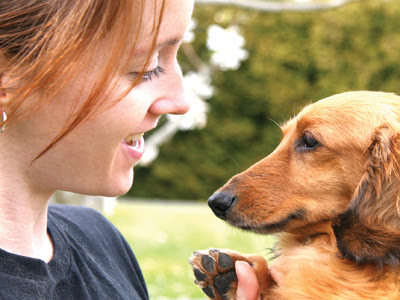 Meet PETA animal rescuer Ashley Fruno and pretty red longhair 'Belle,' a Dachshund who was apparently left abandoned in Niigata, south of Sendai — the area affected worst by the March earthquake and tsunami.   Belle will have a wonderful new home with Ms. Fruno's parents, who reside in Surrey, British Columbia, Canada.  Excerpt from Canada.com:
A B.C. couple is adopting Belle, a red-haired dachshund that was abandoned after the massive earthquake and tsunami that rocked Japan last month.
The dog — who is believed to be four or five years old and in good health — was left with an animal shelter in Niigata, when her guardian fled the country because of radiation concerns.
PETA animal rescuer Ashley Fruno, who worked with the shelter immediately after the earthquake, heard about the dog's plight and contacted her parents, Karin and Brian Fruno, in Surrey.
The couple were eager to adopt the dog, and Ashley Fruno set off on a 23-hour journey.
"(Belle is a) sort of a doggie ambassador," said Ashley. "She's the lucky one compared to all the other ones who weren't so lucky."
As was the case along the Gulf Coast of the U.S. following Hurricane Katrina, many evacuation centres in Japan barred companion animals, so residents were forced to choose seeking safety over saving their pets. Japanese shelters are now filled with thousands of animals in need of safe homes, she said.
Metro News also notes:
Belle is radiation-free, Fruno assured.
“She was actually screened by Japan animal quarantine when she was exported from Japan.
“Then she was screened again when we got to Seattle, then again coming into Canada,” she said.
Welcome to your new home Belle!
Posted by Rowdy and Bette at 7:50 AM

Thanks for the heart-warming story, Joey and Maggie. You can't know how much we needed that today! It sure is good to know that there are some happy endings.....

What a beautiful, sweet Doxie. I can't imagine what the poor Belle has been through! Thanks for sharing.

Sad and happy at the same time! So happy Belle had found her forever home! And so sad that there are so many that may not! Sweet post!

Thank you, Ashley Fruno! You are my hero for rescuing this little sweetie! (And hers too, I imagine.)