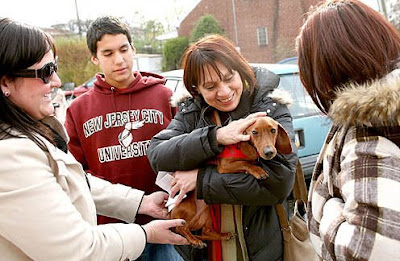 What a warm and fuzzy reunion just in time for the holidays. Woof, WOOF! Handsome red smooth dachshund 'Tootsie' was reunited with his family yesterday in Harrisburg, Pennsylvania, after he went missing 5 years ago. Thanks to his microchip, he was found as a stray in Pittsburgh, some 350 miles away from his Pleasantville, NJ, home. Imagine the stories that Tootsie could tell, if only he could talk.
Above, Tifanie Tiberio, left, of the Animal Rescue League of Western Pennsylvania, gives Tootsie back to Elda Arguello, of Pleasantville, N.J., and her children, Daniel and Edna Colon.
Read all about the story at the Pittsburgh Post Gazzette. There are several news videos of the story circulating, but here's a direct link to the best one at the Pittsburgh Post Gazzette.

Oh happiness! I love stories with a happy ending. Five years is a long time too!