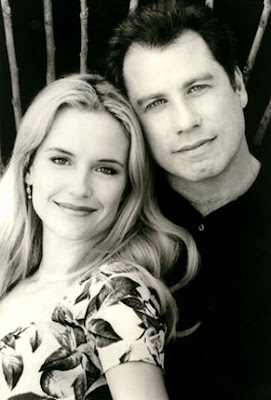 Who? We think you know! With the recent release of Disney's 47th animated Feature, Bolt, we're finding out a little more about one of its stars, John Travolta....Mr. Saturday Night Fever....., Mr. Grease...., Mr. Pulp Fiction. Yep, he's a dachshund lover, and her name is 'Prudence.' He and his wife Kelly Preston and their family have 3 dogs: a Rhodesian Ridgeback, a Dachshund, and, like Oprah, a Cocker Spaniel.

Excerpt from The Star: Travolta felt comfortable getting under Bolt's fur. He has three dogs of his own. "I have a Rhodesian ridgeback, which is close to the size of a white shepherd. I also have a cocker spaniel and a dachshund, which are more my daughter's dogs. The ridgeback is more my size. My daughter likes little dogs; I like big dogs."

Excerpt from Ocala.com: Kelly Preston, meanwhile, calls Prudence the dachshund “Prudie” and says she “rules the roost.” She says this with a chuckle and a sense of pride best understood by true dog lovers.

If anyone has any photos or more information on Prudence, by all means please send it in!

What guys do before they go out on the town.

And now we dance. Turn up the speakers.
Posted by Rowdy and Bette at 1:26 PM

If you haven't watched the old Disney movie, The Ugly Dachshund, lately, it is a real treat. Doxies everywhere, even if one happens to be overgrown.

Thanks inc123! Our good friends Bridget and Rudy gave us a copy a few years ago. It's a fun movie!!