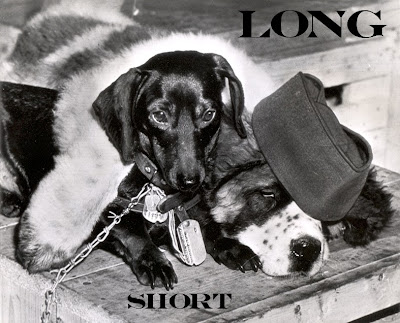 Dog lovers have been keeping up with the big story of 'Ratchet,' the Iraqi dog rescued from a pile of burning trash in May, it sure was a pleasure to read that his human, Sgt. Gwen Beberg, was finally able to bring him to her Minnesota home a week ago after weeks of struggles with the military, who prohibit such actions.
But, dear dachshund readers, adopting dogs from foreign lands during times of war and bringing them back to the United States is nothing new. The above press photo was taken in New York on March 19th, 1946: WAR VETS ARRIVE IN US: Among the more than 100 dogs which arrived yesterday aboard the Liberty Ship Thomas Nelson Page were this Dachshund (left) going to Mrs. Philip Humn of Bloomfield, N.J., and a St. Bernard (right), the property of Mrs. Peter Fillides, of Detroit, Mich. The dogs are pets of soldiers who acquired them during their stays overseas. 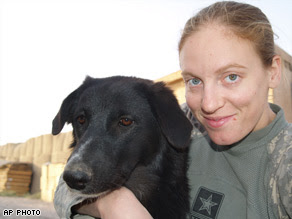 Read all about Ratchet and his human at CNN.

Is that an all black Dachshund? I had never seen that before. I found a few more on Flickr.

Hi Matt,
Thanks for the link, there are some great looking all black doxies there! We thought it was an all black doxie at first too, then thought we saw a little tan on his paws and muzzle, but if you're thinking he's all black as well, he probably is! There's a beautiful all black smooth that comes to a local doxie meetup sometimes, I think his name is 'Panzer.' He's gorgeous.

go to my blog and get a friendly award
http://minhanana.blogspot.com/