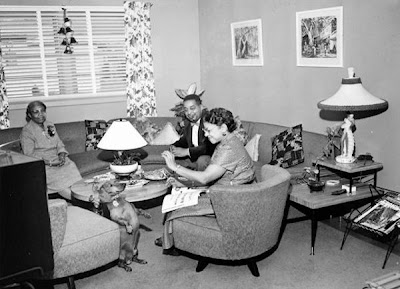 (click image to enlarge)
Thanks to imperturbe over at flickr for this nice vintage photo....we love the retro lifestyle. It's an historical image: a publicity shot of the owners of a new house in the Pontchartrain Park subdivision in New Orleans, playing with their dachshund.
From wikipedia: Pontchartrain Park was developed after World War II. It was one of the first subdivisions developed by and for middle class African Americans during the Jim Crow era of racial segregation in Louisiana. Pontchartrain Park includes a golf course; it has been home to such prominent New Orleanians as mayors Dutch Morial and Marc Morial and district attorney Eddie Jordan. Adjacent to the Pontchartrain Park golf course is the campus of Southern University at New Orleans.
Pontchartrain Park flooded badly in the aftermath of Hurricane Katrina in 2005, taking on water first from over topping of a section of floodwall of the Industrial Canal from storm surge channeled in to the city from the MRGO Canal, then from the major breaches in the London Avenue Canal.
See more of imperturbe's historical photos over at flickr. There's also a nice set of 174 photos from October's Howl-O-Weenie Atlanta!
Posted by Rowdy and Bette at 7:53 AM