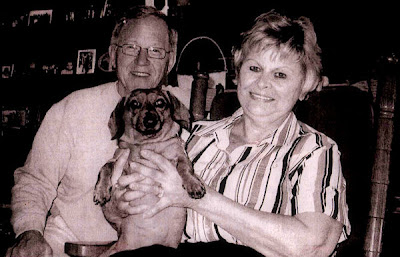 Larry and Karen Smith's pet dachshund, Gregg, is truly a miracle, having undergone extensive surgery after being struck by a car.

We went down state to visit our Grandma, Grandpa, and our country dachshund cousin 'Rudy' last weekend, and our good friend 'Gregg' was in the local newspaper! This is his story by Jim Zuber from the Enquirer-Democrat out of Carlinville, Illinois (the paper is not online, so we can't provide a link!)

All pet owners view their pets as a joy and blessing, but in the case of Larry and Karen Smith of Carlinville, their pet dachshund, Gregg, is truly a miracle.
"We got him in May 2003 from Adopt-A-Pet in Benld," Larry Smith said. "He got his name from the television show Dharma and Gregg." We thought about changing it, but our granddaughter, Colleen Madden, told us, "No, they said his name is Gregg, and that's what it's going to be."
On July 3 of that year, Gregg was struck by a car in Gillespie, where the Smiths resided at the time. As a result of the accident, the dog suffered a broken left hip and right leg. Devastated, the Smiths contacted Lorraine Jackson at Adopt-A-Pet, who recommended they contact Carlinville veterinarian Steve Sandino.
"We met him at his office, and he told us he would check Gregg out and have us come back the next day," Karen Smith said.
After taking X-rays of Gregg's injuries, Sandino told the Smiths there were no internal injuries and suggested taking the dog to Dr. Mark Anderson, a veterinary specialist in St. Louis.
"We were told it was going to be expensive," L. Smith said. "We debated the possibility of having him put to sleep. Then, one night, he was in his cage in the other room, and he started barking. We opened the door to see what was wrong, and he drug himself over to us. We stood there with tears in our eyes. We knew then that we would take him to St. Louis. We went to see Dr. Anderson, and he told us, "I can fix this dog; he will walk again."
Gregg underwent approximately $3,000 worth of surgery which included putting in a plastic left hip and a rod in his right back leg. K. Smith worked with Gregg to help the dog learn to walk again after surgery. The couple also took their pet out on their pontoon boat at Carlinville Lake, where the dachshund could swim in the lake. Today, Gregg shows no signs that indicate he was ever injured.
"This dog would not be alive it wasn't for Dr. Sandino," K. Smith said. "He runs fast, and he can jump. He and our cat, Casper, chase each other and play all the time. But, he doesn't go out without a leash. He's also very good with kids. Our grandson, Jake Schwartz, is here four days a week, and they get along great. When I buy a ball for Jake, I've got to buy one for Gregg. He thinks he has to have one, too. He's a good little dog and a joy to have around, and the most important thing we've learned from all this is 'Don't give up on your animals.'"
Can we get a woof?
Posted by Rowdy and Bette at 8:04 AM

Thanks for scanning this photo and typing out this story Joey and Maggie. Gregg is a lucky boy.

Linda and the critters

My dachshund name Dona meet with an accident. She injured her rear left leg and jaw about a month ago. She is about one year old. After series of X-Ray we found that there is no fracture at any part. Now her leg is almost OK. But her lower jaw is not OK. The jaw is partially open and more open at right side. We have taken the madical support as available in Kolkata, India but the doctors are not very confident.My wife feed her regularly so she is improving. Now she can bite some meat. biscuits, breads etc and eat. But her jaw is still open and I feel the lower jaws are moved from it's position. I need some advise to make her all right. We are unable to see her condition. Please help.