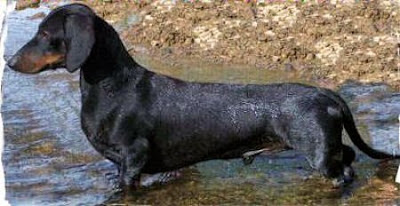 We've got a very special post today. Last weekend, in several of our on-line dachshund and dog groups, there were multiple messages and photos about a lost dachshund named 'Dash.' The support from the dog community to find him was enormous, and it was such a relief to hear a few days later that he had been found. We had to find out more about this special handsome boy, so we contacted Marilyn, his human, to see if she would share his tale, and she graciously agreed. So without further ado, meet Dash, UKC CH RBIS TAC's Dash Of Teeny Weenie Perfection. This is his story:

On Friday Nov. 7th we traveled from our home in Cairo, West Virginia, to Chesterfield, Virginia, to participate at the Mid Atlantic UKC dog show. Dash was awarded Best of Breed and a Scent Hound Group 2 placement, thus giving him his final win that was needed to make him a Champion with UKC.
Having friends in the area, we drove to Hopewell VA. after the show to spend the remaining part of the weekend with them. On Sunday, instead of heading straight home we decided that since it was such a beautiful day, we'd ride the motorcycles to Surry Va. and take the ferry across the Jamestown. It was a beautiful trip until right after lunch when we got the call that puts fear in any dog lover! Dash had been left at my friends house inside with their Dachshund mix and with their teenage daughter to look after the dogs. Either the storm door didn't get latched, or crafty Dash managed to push it open anyway. The phone call stated that Dash was missing and she didn't know how long he had been gone or where he was.
The ride back to Hopewell seemed to take forever although I know we were moving as quickly as safely possible to get back. We started searching for Dash right away. I placed my own clothing out in the yard hoping that his scent hound nose would lead him back to me. The area he was lost in was city streets and traffic and not something that Dash is familiar with at all. I placed a call to friends in California and Michigan asking that they announce on all groups that Dash was missing. I spoke with his breeder to get his microchip number and contacted police as well. At one point we were given hope by the police and sent to a specific area that they said a female officer spotted Dash and that he ran from her. We searched there but to no avail.
On our way back to my friends house I got a call saying that my mother had been in an accident and was being life flighted to an Ohio hospital. It doesn't get much worse than that! Immediately after getting back to my friends house, the police call and say they have found a dog hit by a car in the area that they'd had us looking in. The officer didn't know his dog breeds and asked us to come and look at the dog. I sent my husband knowing that if it were Dash I didn't want to see him like that. Unfortunately for the Yorkie that was hit it was too late, but lucky for us it wasn't Dash! At 9 p.m. we gave up for the night.
On Monday morning I got up and started calling vet hospitals, clinics, animal shelters, animal control, the police, and put an ad in 4 newspapers. We went and had flyers made with his photo on them to post around as well. Then the phone rang and THAT call came in! One of the local vet hospitals that I had called that morning called and said that a person had called them and they thought she had Dash. I was given her phone number and talked to her immediately. A good Samaritan named Sherry Hardin had been driving through Hopewell apparently not long after Dash had gotten loose and she spotted him walking down the middle of the street.
Thankfully he went to her and she placed him in her car. She took him around the neighborhood trying to find his home and contacted police but no one knew anything of a missing Dachshund, we were still on our way back from Jamestown at that point.
Sunday night Sherry took Dash in her house and even let him sleep in her bed with her. Monday morning having to go to work, Sherry dropped Dash off at her mother's house in Hopewell and I was able to pick him up there. He looked just like he did when I had last seen him and was very eager to see us. Monday afternoon we made the return trip home to West Virginia and Dash is back to his normal life keeping pups in line and playing with his girls.
To Sherry and her mother, I can never thank them enough for what they did for Dash and I. I was so certain that I would never see my boy again. Thanks to all the folks who posted missing bulletins about Dash and to those that cross posted them far and wide. Thanks to the VA. folk who called me offering to come and help us look for our lost boy. Thanks to everyone and most especially thanks to Sherry and her mother! They kept my boy safe and brought my little prince back to me, and for that I am forever grateful!!!
If anyone would like to see more photos of Dash you can do so on our website http://www.pendachs.com/ and just click on Dash's page.

Thanks so much again to Marilyn for sharing Dash's tale. Congrats on his new title, and we hope your mom is doing well. 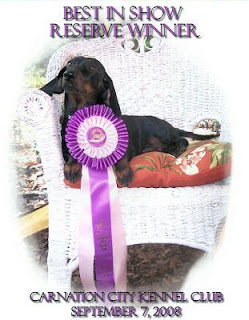 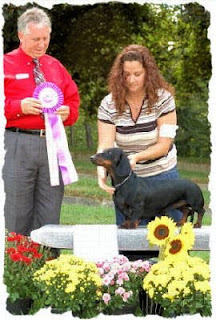 See more beautiful photos of Dash at PenDachs.
Posted by Rowdy and Bette at 7:44 AM

I'm so glad he was found! Good thing he was picked up right away by such a good person!

Extra HUGS and KISSES for Dash!!!! Congratulations on his championship too!!

Thank you for sharing Dash's story. You did everything right when he went missing. What a nightmare!

I'm so glad great people helped a great doxie get home to his great family. It's a good world...

Oh thank goodness! What kind people to care for Dash, and what a lucky dog! I hope the mother is doing much better now too.

Hooray for Dash! What a great reminder to get our little ones microchipped. So glad he made it home...

We feel for you, we also had our girl get frightend and run off at our vacation home in Wisconsin. She was gone for three days in May, it was cold and rainy and horrible. After never ending searches, phone calls and tears, I gave up and wanted to go home to IL. My husband brought me back, very distraut, and went right back to Wis. and continued the search. After three days of no food and sleep he was at the local walmart getting something to eat when a phone call came in to his cell, asking if he had a girl named Libby. He told me he fell to his knee's in disbeleif.
He went to the home, and was told that she had shown up days before and was playing with thier dogs, and assumed she had just been the neighbor's dog, but would follow all her dogs into the house for the night. My husband called me, I just couldn't believe it. He told me he was going to get some rest and come home in the morning, I made him come home that night with my Libby. She was so happy to see us, crying and kisses. We took her to the vet the next morning for a check up, not a thing wrong with her, not a burr or scratch, and she didn't even lose a pound. I was so thankful that those people who found her didn't try to keep her, and we found out why, they had just found thier lab after being gone for 5 days, and new the pain and anxiety we were feeling.
By the way, she was over 3 miles away from her summer home!
I thank my husband all the time, he never gave up and never stopped looking even though he would have never found her. After all of that, I still get anxious when we take the dogs anywhere, making sure they are never unleashed.
I never again want to go through that again, I just thought I could have taken every pill in the house and just go to sleep, that's how much I love my Libby.
Holly Schaefer